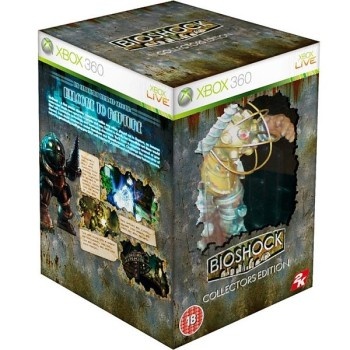 "Special Edition" game releases are becoming increasingly popular as the industry attempts to bolster its bottom line, but is there a limit to how much extra consumers are willing to pay for a metal box and an art book?

Once a rarity, limited edition game releases are becoming increasingly ubiquitous as publishers struggle to thrive in an increasingly competitive marketplace. A new report by Electronic Entertainment Design and Research [http://www.eedar.com/] indicates that "special edition SKU" releases for the current generation of consoles have shot up 472 percent over comparable releases for the previous generation of hardware. Much of the impetus for this tremendous growth stems from a relatively new willingness among publishers to "experiment" with increased price points as the industry becomes more dependent on higher prices, rather than increased unit sales, for revenue growth.

Interestingly, this phenomenon is occurring simultaneously with an overall drop in videogame prices, a fact camouflaged by the popularity of "peripheral-based" games like Wii Fit [http://www.rockband.com]. While consumers are paying top dollars for these games and the special controllers they require, the number of games coming in below the "standard price points" - $59.99 for the Xbox 360 and PlayStation 3, $49.99 for the Wii - is increasing, and actually out-pacing the overall number of games released.

That, however, is not a sign of changing attitudes and a demand for lower prices but instead reflects the growing number of "non-traditional" gamers entering the market who are more sensitive to price points than core gamers. The Wii [http://www.wii.com] in particular is cited as attracting many new gamers, as well as owners of older hardware who are attracted to casual and family-oriented titles, games which are typically priced lower than their high-profile AAA counterparts. Core gamers, on the other hand, are noteworthy for their willingness to pay top dollar for high-value games.

There are limits, of course. Stepping away from EEDAR's analysis for a moment, I think it's a safe bet that while the Fallout 3 Collector's Edition [http://www.amazon.com/Fallout-3-Collectors-Pc/dp/B0016BVYDY] may have been popular, the Amazon-exclusive Survival Edition - the one with the life-sized Pip-Boy and three-digit price tag - would likely not have fared so well. And as the non-traditional demographic continues to grow as a percentage of the market, it's possible we'll see an eventual decline in the release of special editions in conjunction with a shrinking core gamer market.

But perhaps the most interesting point made in the report is the potential for price competition to impact consumers' attitudes toward the games they buy. Essentially, as the overall price of games decreases, while the number - and cost - of special editions remains high, even core gamers may begin to expect more for their money. "The aggressive pricing of the seventh generation is a double-edged sword; if pricing begins to correlate more strongly with value, then publishers/developers need to be careful about the games they have in development," the report says. "One of the many lessons learned from the 2008 holiday season is that large marketing budgets and/or large development costs do not necessarily equate in the customer's mind to premium price points on retail shelves."

EEDAR says it doesn't expect the huge increase in peripheral-based and special edition game releases to continue through 2009, but for now at least, gamers are in the enviable position of having choice. Hardcore fans can lay down a few dollars more and take home some extra loot, while people who just want to play the game are paying less than ever before to do so and it's a safe bet that publishers will continue to play with both price points and release bonuses as they try to maximize returns across the breadth of the gamer market.

the Survivor edition of Fallout 3 that Amazon.com offered sold out in moments, and my brother and i were frozen out of buying copies for ourselves, so this article is incorrect on that point...

moreover, i do agree that there seems to be an overabundance of special editions lately...

you kow, the day all these special editions and "limited editions" start offering something worthwhile, i'll start buying them. yeah, i bought the GTA one for the lockbox, and the Fallout 3 one for the bobblehead (they were sold out of the survival, freakin bastards), but for the most part its crap i dont really care for. i'm sure people dig the concept art books, and the soundtracks, but that just isnt my thing. and teh day "limited edition" actually means "limited edition" and not "we'll ship out a few at launch, and a shitload 2 weeks later" i might actually care. until then, i'm perfectly happy with the regular retail edition.

I don't own any special editions at the moment, previously I have owned a Turok one, but hated the game, so traded it to my mate for Uncharted: Drakes Fortune.