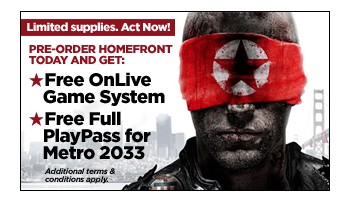 When buying a game console, it's not unusual to be given a free game as part of the purchase. It's a little less common, however, to buy a game and be given a free console, yet that, with a catch or two and a bit of fine print, is the deal OnLive has put on the table: buy Homefront, get a (mostly) free OnLive MicroConsole.

Yes, "mostly." OnLive will eat the regular $99 cost of the console but you, the purchaser, will still have to cover the cost of shipping plus any applicable taxes. On the upside, you'll also get a free Full PlayPass for Metro 2033 [http://www.amazon.com/Metro-2033-Pc/dp/B002V14VOC/ref=sr_1_2?ie=UTF8&qid=1298923830&sr=8-2], last year's post-apocalyptic Russian shooter, to keep you busy while you wait for Homefront to show up.

And how can OnLive afford to give away its consoles? To be blunt, it's not exactly handing out PS3s here; the $99 cost of the MicroConsole isn't that much more than the regular retail price of a major game release, a relative bargain if it brings in new sign-ups to the service, where the real money is made. What's really interesting is the fact that it represents a tentative first step toward a fully service-oriented approach to gaming, similar to the mobile phone market, in which the hardware is heavily subsidized and almost irrelevant.

As usual, the other usual suspect limitations apply. Offer is only available to U.S. customers and supplies are limited. OnLive's Homefront console giveaway offer is on now and runs until March 14. Full details can be found at onlive.com [http://www.onlive.com/go/homefront?utm_campaign=HomefrontPreOrdBlog].

This offer proves to me that combining two things I don't want does not make me want both.

Interesting offer. Although it seems a bit off, since (as far as I can tell) you only need the console if you plan on playing on your TV; the PC just has a client version.

Still, if you're console-exclusive then I bet it could be pretty nice. I haven't tried the service personally, but it could be the "next big thing" and this can't hurt it.

EDIT: Now that I think about it, it seems like they're pushing really hard for pre-orders. Reminds me of the idea that you should advertise the hell out of a bad movie in order to sell the most tickets on opening day before people realize what crap it is. I wonder if the game isn't as good as it seems...

Sweet, there will be a ton of these consoles on the secondary market that will probably be sold for a few bucks. I wouldn't pay 100 for a subscription only console but maybe 25 if that was the total cost of the box and 1 month sub.

Now if the box let me stream games, music, movies, etc from my pc with a 10 foot controller/couch interface I would be way more interested.

Steam has kinda the same deal...pre-order Homefront and get Metro 2033 free, the let down though is that you won't get the bill to pay for shipping and the console thingy....oh wait that's not a let down at all:>
P

What Subscription? As far as I know, they dropped that. You can, however get a "playpack" for $10/month that lets you play as much of that month's playpack games as you want.