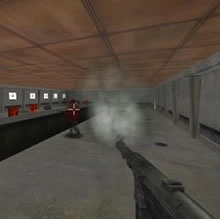 Lebanese prosecutors are investigation a pro-Syrian videogame released in December 2006 in which the player is tasked with wiping out every member of Lebanese Prime Minister Fouad Siniora's government.

Known as The Battle of the Sarai, the game takes place over three stages. In the first, the player must kill the national security forces which are guarding the government building in order to gain access. Once inside, the player will uncover secret tunnels leading to the U.S. Embassy, located in the city of Awkar. Part two of the game involves killing the "gang of 14," who escape the original attack via the tunnels. The game culminates in the third chapter, in which the player attacks a meeting of Siniora and his cabinet, murdering everyone present.

The game was designed in France by a Lebanese citizen using the pseudonym "Ziad al-Hajj," who was quoted as saying he created the game to "express the wishes of many Lebanese," adding, "I gave them what they want." Since the game's release, his blog has been shut down, and attempts have been made to remove all materials related to the game, including a YouTube video.

Lebanese Prosecutor General Saeed Mirza ordered an investigation into the game after its existence was brought to light by a report in the Lebanese newspaper as-Safir. Information Minister Ghazi Aridi said the game exceeded the limits of entertainment and served no educational purpose. "This... targets the safety and security of the country, because it will only escalate grudges, conflicts and divisions," he said. According to the An Nahar newspaper, the current investigation is "a prelude to judicial lawsuits against parties behind the game."