Projects that fizzled out that you really wish hadn't.

That Silent Hill game Hideo Kojima and Guillermo Tel Toro were working on before Kojima and Konami split. That demo was fantastic and... man, I'm making myself sad again. Why can't we have nice things?

The ones that really come to mind at the moment are a few webcomics.

There is Poppy O'Possum, a very excellent web comic with great art that still updates but not very often and I read that the creator was getting burned out with it.
http://www.poppy-opossum.com/comic/a-story/

There is also Beatrix Overseer, also really great art and an interesting premise, but this one updates even less frequently, I think there has only been one update this whole year.
http://beatrizoverseer.tumblr.com/page/44

Then there is Derelict which was pretty interesting but has had no new comic pages in slightly over a year, although there are a few notes from the author.
https://derelictcomic.tumblr.com/post/159475476183

09philj said:
but Attack of the Cybermen, Vengence on Varos, and Revelation of the Daleks are hidden gems.
Click to expand...

In addition to many of the things already said, I'm going to add Stargate Universe. Yes, yes, I know, many people didn't like it, but as a massive SG fan who's watched the previous shows about 10 times each, I thought it was ok. It was different, yes, but after 15 seasons of two other shows doing mostly the same things I was fine with that. I just would have preferred a more definitive ending to my favourite sci-fi franchise than what we got.

Also, Tru Calling was an interesting show. Took a while in the first season to get out of it's basic "problem of the week" setup and start delving into some of the deeper mythos, including adding an interesting antagonist and overarching philosophical counterpoint to the heroes actions, but once it did things really picked up. Shame it only got like, 6 more episodes in season 2, just when it was starting to get good.

WITCH was another good one. We got 1 good season, and 1 great season (thank you Greg Wiesman) and that was it. They even left us with a setup for the next seasons antagonist, so clearly more was planned.

The Oddworld Quintology. Or Tetrology or whatever it was supposed to be. They had a bunch of games planned, and even a potential movie I think, and then they just... stopped. I think moving to 3d and jumping console after Exodus was what did them in. Now all we get is unnecessary remakes of the originals.

Lastly, Monty Oums Dead Fantasy series. I know it was only ever being done as a showcase of his animation skills, all done in his spare time, which ultimately got eaten up with working on RvB and then RWBY, but I still would have liked to see him finish the series. Alas, now we will never see what else he had planned...
Even more of a shame because apparently his Rikku vs Ayane fight was supposed to be amazing, and Rikku is like my favourite character from anything ever.

It would have been so fun! The teasers and trailers looked great!

I was sad to see that happen. I was excited for the revival as well. But, I'll always remember SMBZ fondly.

OT: While not a gaming related thing, I seriously wish Phonebloks [https://phonebloks.com/] took off. But then Google bought it, turned it into Project Ara, and then... scrapped the whole thing :I The guy who came up with the original idea was pissed, and understandably so

The Escapist Magazine as a business.

I also want the next Game of Thrones book to be released already so I can re-binge the books.

I'll second Dragon Ball Z Abridged. While they won't tell the reason outright, it's a rather clear issue about the careers of those people: they want to keep making video entertainment things and such, BUT they have a portfolio that's filled with legally questionable material they made for some fans. Even if they owe their existence to those fans, it's not something that forms the basis for a more renowned career in the business.

A sexy-pervy webcomic Bloomin' Fairies ended abruptly (and the author actually PULLED IT OFF THE INTERNET) for a similar-ish reason. Patreon updated its terms, making them vaguer towards pornographic material. Combine that with not really wanting to make your softcore porn-comic the highlight of your portfolio and you might get what happened here. Also I have a copy of the whole comic. :^) For history.

necromanzer52 said:
Guillermo Del Toro's version of The Hobbit. It fell apart after 18 months of pre-production. Instead, we got 3 movies I'd rather not talk about.

Or his "In the Mountains of Madness" movie. Or third Hellboy. This man really has bad luck when it comes to this stuff.

Morroblivion, Skywind, Skyoblivion, and the two that were going to update Fallout 3 and New Vegas into the Fallout 4 engine. While they might still be working on Morrooblivion and Skywind I haven't heard much of anything about either, and some B.S. legal issues killed the Fallout 3 remake which probably means the New Vegas one isn't far behind. All these games could have really used the update especially Morrowind and it's nuts that Bethesda themselves haven't done it.

I was sad to see that happen. I was excited for the revival as well. But, I'll always remember SMBZ fondly.
Click to expand...

Yeah, I've read that a year ago. But it says:

A lot of people have been asking on a near daily basis about when the next episode of SMBZ will be coming out. And the answer to that is a whole hearted...

Fact is, SMBZ is the least of my priorities at this time. But rest assured, I have not forgotten about it.
Click to expand...

Which clearly is different from 'never gonna happen'.

Faaaaaaiiiiiirrrrr, buuut... I'm not really holding my breath. Unless there's a huge turn-around, I don't imagine it'll happen. If it does, it probably won't be for a long time
J

Spoony is legitimately the funniest guy to come out of the internet reviewer craze. Shame about the whole situation, but it's not exactly an unfamiliar story. He finally got his Twitter account back though, so at least he can ***** about wrestling again. As long as he's not entirely vanished I can still pretend like he'll make a comeback. 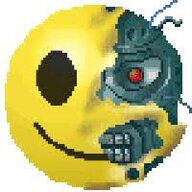 He also, from what I have read on his website etc, got full backing from games workshop!
saw in one of his recent videos that he just doesn't have the resources to finish it.

He also, from what I have read on his website etc, got full backing from games workshop!
saw in one of his recent videos that he just doesn't have the resources to finish it.
Click to expand...

Something about it just rings off to me. Full backing from GW, with the rumors say a rewrite of the script with Dan Abnett and the Black Library voice actors, yet he doesn't have the resources? There's a hundred animators who would do this for free out of love for 40k, 1000 who could be hired using a kickstarter or gofundme, 10,000 if GW put some money behind it.
Something else happened.
R

There was once an English TV show called about Adolf Hitler and Eva Braun moving next door to a Jewish couple. This probably sounds like a high-tension drama, but was actually a sitcom. It was called "Heil Honey, I'm Home!". Now, while this premise could have been hilarious, it would have been deeply insensitive and insulting, so the show was canceled after a single episode, an impressively short run.

Back in 1969, some of the people behind the wildly popular Laugh In made a show called Turn On, which was supposed to be a sex-themed version of the same idea. It was canceled during the airing of the first episode. Crusade, however, beat them both: it was canceled before the first episode aired, which I believe is still the record. Babylon 5 was a creation of almost Wagnerian intensity and control, and it beat the hell out of JMS; look at pictures of him before and after. It only lasted five years, but it looks like he aged twenty. The result was one of the finest TV shows ever made, but it definitely took its toll.

Also, there was one thing that came after Legend of the Rangers: The Lost Tales. The idea was to have a series of short anthology set pieces, thematically connected, but freestanding. Only one disc got released, and it didn't sell well enough to warrant making more; JMS said he wouldn't do anything more with B5 if the project wouldn't have the money to do it right.

The Lost Tales themselves were... well, they weren't bad, but they were very small. Each has two main characters and one secondary, and that's basically it. The scenes taking place in a recreated station (Warner Brothers lost the old sets) are empty and dark and quiet, a far cry from the hustle and bustle of the station we'd last seen a decade before. It's hard to watch without feeling that something truly amazing was lost, and you're standing in the ruins. A testament to the power of the show, I suppose, but it's still sad.
T

Fear Effect Inferno: Killed so they could free up resources for Tomb Raider: Angel of Darkness (so poetic revenge was served in the end).

Final Fighting Fantasy: It was increasingly apparent that the animator was taking on more than he could handle for a newgrounds project near the end.

Recusant said:
-The Critic. Think of what Family Guy would be if they dropped the crudity but kept the relatability, lost the hostility but kept the bite, and kept the rapid-fire change-of-reference-frame jokes, but made them actually funny (consistently) and often actually clever. Then it gets canceled after the second season and its final episode is a clip show.
Click to expand...