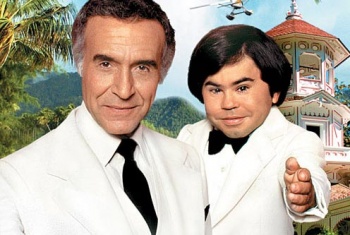 Mexico-born actor Ricardo Montalban - better known as both Star Trek's Khan Noonien Singh and Fantasy Island's Mr. Roarke - passed away today [http://www.msnbc.msn.com/id/28661103/] in his home at the age of 88.

Montalban's passing was announced at a meeting of the Los Angeles City Council by President Eric Garcetti, the representative for the district in which Montalban lived. No cause of death was given, but given that the man was almost 90 years old, I don't think it's too early to rule out simple "old age" as a factor.

Geeks and nerds may best remember Montalban for his role as genetically-altered superman antagonist Khan Noonien Singh in an episode of Star Trek: The Original Series, which he reprised as the eponymous villain in the film Star Trek II: The Wrath of Khan. However, to everyone else, Montalban is probably most well-known for his work on Fantasy Island, where he played Mr. Roarke, the owner of a tropical island resort where people went to make their lifelong dreams come true.

Sadly, we never got a crossover between the franchises where Kirk, Spock, and Bones took "da plane" to the island, only to have Mr. Roarke try and exact revenge for marooning him in deep space.

Patrick McGoohan also died yesterday... with the passing of two geek icons 2009 gets off to a bloody start. Hopefully it isn't as morbid as 2008 was.

You know, it was only a few months ago that I learned that Mr. Montalban was the guy in both Fantasy Island and Star Trek II. I remember being wowed by that particular fact, because the respective characters were so far on opposite ends of the spectrum.

From Mexican movies to MGM musicals to Fantasy Island to Star Trek... here was a guy who made his own dreams come true. We've lost a classic.
C

i wish i could find the clip of him saying his name at a star trek convention, it was rather cool

Hope his coffin is lined with the finest soft Corinthian leather.

Gildedtongue said:
Hope his coffin is lined with the finest soft Corinthian leather.
Click to expand...

And that no one puts Ooey Gooey worms in his ears. He was excellent but little known for his voice talent on Freakazoid.

It's been done once already, but the man and the moment demand it.

"I've done far worse than kill you, Admiral. I've hurt you. And I wish to go on hurting you. I shall leave you as you left me, as you left her... marooned for all eternity in the center of a dead planet... buried aliiiiiiiiiiive!"

I may have never really watched Star Trek or seen the famous "KHAAAAAAAAANNNNNNNNNN" line, but rest in peace Khan.

Gildedtongue said:
Hope his coffin is lined with the finest soft Corinthian leather.
Click to expand...

And that no one puts Ooey Gooey worms in his ears. He was excellent but little known for his voice talent on Freakazoid.
Click to expand...

Only thing I actually remember him in. And he had a great voice.

Wasn't he also in the Naked Gun? He was flattened by a steamroller and a marching band