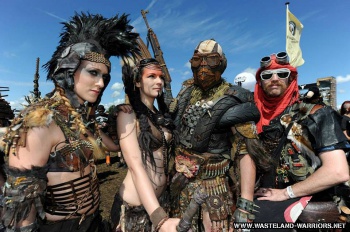 As we reported last November, live-action roleplaying in Europe <a href=http://www.escapistmagazine.com/news/view/138558-MethanCity-Post-Apocalyptic-LARP-Pits-Humans-Against-Mutants>can take on an incredibly detailed post-apocalyptic flavor. But apparently this isn't an isolated thing - just take a look at the Wasteland Warriors. Comprised of a group of artists and role-players in Germany, these folks have gone out of their way to make their world look like Mad Max without the hazards of fallout. How dedicated are they? So dedicated that some of them build matching, post-apocalyptic cars.

The Hollywood-quality costumes themselves come in two varieties - the dictatorial "5th Division" army and cannibalistic raider tribes. Between that, the vehicles, and a roster of up to 50 performers, the Wasteland Warriors can make themselves available for promotional film/photo shoots, stage shows, and even cagefight performances. If the Wasteland Warriors were any more dedicated, it might lead to actual Armageddon. And not the Bruce Willis kind with an Aerosmith soundtrack.

Even outside of the larping world, this style has slowly been creeping back into the cosplay scene. Movies like <a href=http://www.escapistmagazine.com/news/view/138558-MethanCity-Post-Apocalyptic-LARP-Pits-Humans-Against-Mutants>the new Mad Max and games like Wasteland 2, fans are seeking all kinds of ways to live end of the world fantasies without having to scavenge for gasoline. Regardless, whether end times cosplay is fashionable or an actual apocalypse breaks out, these individuals look very well-prepared.

I was going to make a snarky comment about how useful costuming skills will surely be after the collapse of civilization...

but that car is pretty sweet. I really hope it's fully functional!

Ah yes. Nothing says irradiated wasteland like an open midriff.

I'm getting massive Fallout 3/NV flashbacks. I warn you, Raider scum, I've plasmafied more of you into piles of green goo than I can remember, you raping, murdering, cannibalizing buggers!

Color me impressed, though me being a fan of such things helps. Think there's any of this on Youtube? 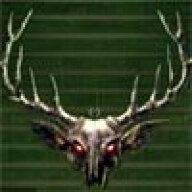 I'm noticing a lot of guns, and a distinct lack of crossbows.

I'm gonna be honest, as I was scrolling down the page I saw the thumbnail and it did NOT look like a leg poking out from that skirt. Definitely took me a moment to doublecheck what website I was on.

The weird thing is that I'm starting to see similarly dressed people on the streets as of late. I guess it never hurts to prepare for the Apocalypse, or what comes after it.
And in my home country (Bulgaria), I've seen similarly looking cars on the roads