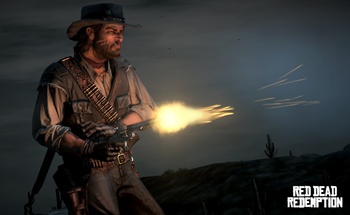 Apparently, the Japanese really like pretending to be cowboys.

It seems to be a widely-held axiom in the games industry that while Japanese-made games and hardware can succeed in the West, the reverse is far from true. The Xbox 360 has faced notorious difficulty gaining traction in Japan, and last winter Square-Enix boss-man Yoichi "Imperial Hot" Wada publicly lambasted gamers alike [http://www.escapistmagazine.com/news/view/97346-Yoichi-Wada-Blasts-Japanese-Retailers-for-Anti-Western-Bias] for their anti-Western bias.

Anti-Western bias, perhaps - but that doesn't mean Japanese gamers can't enjoy pretending to be cowboys. Following its recent debut, Red Dead Redemption entered the Japanese all-format retail charts at #4 (PS3) and #7 (Xbox 360), selling 70,599 and 25,673 copies, respectively. It may not sound like much, and it doesn't quite match Grand Theft Auto IV's November 2008 high-mark of 160,000 copies, but it's a damn nice showing for a Western-made title.

The other new releases on the chart were Square-Enix's DS title Kingdom Hearts Re:Coded, which entered the list at #3, and F1 2010 (PS3) that debuted at #8. The number one spot, of course, was still Nintendo's Pokemon Black & White, which has moved a phenomenal 3,992,855 units since its launch last month.

As impressive as this showing is for a Western title in Japan, it's really a drop in the bucket overall - Rockstar says that Red Dead Redemption has sold 6.9 million copies around the world.

Wow, thats rare, the only other western game shooter that I know that was a sucesss in japan was Killzone 2. For some reason they REALLY liked it, I did too but I was surpised none the less.
B

Rockstar games are actually really big over here in Japan, further smashing the stereotype that they don't like open-world games and "bland Western art".

The idea that Japanese people don't like FPS games seems to be true though.

boholikeu said:
Rockstar games are actually really big over here in Japan, further smashing the stereotype that they don't like open-world games and "bland Western art".

The idea that Japanese people don't like FPS games seems to be true though.
Click to expand...

Its Cowboys! Everyone likes cowboy. My real guess is that everyone just wanted to relive Samurai Gunman.

With how often they nick Western themes in their media, it's surprising that Western (as in the genre, not the region) still meet that level of bias normally.
B

boholikeu said:
Rockstar games are actually really big over here in Japan, further smashing the stereotype that they don't like open-world games and "bland Western art".

The idea that Japanese people don't like FPS games seems to be true though.
Click to expand...

actually, Killzone 2 fared quite well in Japan.
Click to expand...

True, but that's the only FPS I can think of that did well whereas pretty much every Rockstar game is instant gold over here.
C

Who in the world has never wanted to be a cowboy, at least for a little while?

Hell, considering how many animes are very 'wild west' influenced, I'm not surprised.

Im not surprised really, japan loves the idea of the lone swordsman, or gun slinger

It's not really that surprising, Capcom were the original developers of Red Dead Revolver before they sold it to Rockstar.

Also, if you've ever played the Way of the Samurai spin-off, Samurai Western, you'd know the Wild West genre has quite a lot of popular appeal in Japan, since there are quite a few similarities between a the ideals of the lone swordsman and the lone gun-slinger.