Report: Xbox One More Popular Than PS4 on Black Friday

Report: Xbox One More Popular Than PS4 on Black Friday 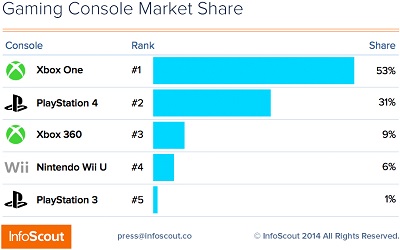 A recently released report from the analyst group InfoScout indicates that the Xbox One may have won over the most wallets this past Black Friday.

Black Friday. For many shoppers, it's an unparalleled opportunity to get more for less, especially when it comes to things like electronics and video games. Many customers this past weekend, in turn, used the day's discounts to get their hands on bundles containing Sony and Microsoft's latest consoles: the Xbox One. The obvious question, of course, is which one sold better? If emerging reports can be believed, X may mark the spot.

According to a survey conducted by the analyst group InfoScout, as many as 53 percent of shoppers who purchased a game console on Black Friday bought an Xbox One. The PlayStation 4, comparatively, only managed to capture 31 percent of the day's total sales. Trailing much further behind it were the Xbox 360 with nine percent, the WiiU with six percent and the PS3 with one percent. These percentages were tallied by examining more than 180,000 receipts taken from major retailers "including Walmart, Target, Best Buy, GameStop, Radioshack, and others."

What's arguably interesting about these figures is the way they contrast how the consoles have sold the rest of the year. While the Xbox One has built a solid following on the back of high profile releases like Titanfall, the console's sales have consistently <a href=http://www.escapistmagazine.com/news/view/136566-Report-PS4-Outselling-Xbox-One-3-to-1>fallen short of the PlayStation 4's. A possible explanation for the Black Friday disparity could lie with the price of console bundles featured being sold by retailers. An image featured in the InfoScout report showed that the top console purchase at both Walmart and Target was an Assassin's Creed: Unity Xbox One bundle being sold <a href=http://www.escapistmagazine.com/news/view/138815-330-Xbox-One-PS4-in-the-Big-Black-Friday-Roundup>for $329. In second place at both stores was a PS4 bundle containing Grand Theft Auto V and The Last of Us: Remastered for $399. While the PS4 bundle contained two games as opposed to one, the lower price tag could have been a strong force for persuading customers to buy an Xbox.

Responses from InfoScout panelists also indicated that as many as 75 percent of console purchasers based their decision on the game it was being bundled with. With 90 percent of reported console sales coming from bundles, the popularity of Assassin's Creed: Unity (warts and all) could have been a big swaying factor for Microsoft's gaming machine. Speaking with The Escapist, a Microsoft representative stressed that InfoScout's figures are not official. That said, if they're anything close to the truth, this past Friday was a good one for Xbox. We've also reached out to Sony to get their take on the report.

That's because everyone already has the PS4....

everyone already bought PS4's so of course the xbone sold well on black friday.. anyone could see that coming.

OT: Credit to Microsoft for not jumping on this with some PR crap but rather using the sensible "these stats are not official" statement.

Hmm. I wonder if the Xbones sold were Kinect 2.0 bundled or free of that worthless add-on.
Apart from that, it looks like the two horse race to utter mediocrity just got closer. Woo hoo?

Already ninja'd on the "Everyone already had the PS4" I see.

If your product only sells well when its price is slashed, it is perhaps an indication that your product is not viewed as worth its asking price.

Not that I'm bothered. My choice of PS was mostly because I hate the Xbox controllers.
D

crazygameguy4ever said:
everyone already bought PS4's so of course the xbone sold well on black friday.. anyone could see that coming.
Click to expand...

I was very nearly one of those people who got a xbox one to go along with my ps4 but then I realised it has no exclusives apart from Sunset Overdrive that I'm interested in.
Was then going to buy a Wii U but then Nintendo in their infinite wisdom decided to release Pokemon ORAS on black friday (UK) so I couldn't justify getting both.
Guess I'll wait until the January sales now.

Atmos Duality said:
Apart from that, it looks like the two horse race to utter mediocrity just got closer. Woo hoo?
Click to expand...

Escapist man... When did it become to anti-games?

Just because I follow the business news of game consoles doesn't mean I indulge in them.

You think I'm negative? You want me to start liking AAA games? Then the market needs to make better AAA games, because I'm not going to blow sunshine up anyone's ass just to make them feel better about their hobby.

Assassins Creed Unity Vs. Grand Theft Auto 5 and the Lats of Us. Proof that pole would rather have something new, even that something is a buggy glitchy mess. Most peculiar.

I find it more odd that the Xbox 360 is hanging in there. Hasn't it been a case of there only being games on the PS3 for the last two or so years? (Well, it is since only me and about six other people liked Gears Judgment).

This does not surprise me. Those $330 deals for bundles at several stores (and $50 off MSRP for the whole month anyway), the fact that more games are out for it right now, and the lack of that anchor known as the Kinect made the xbox a decent contender for the PS4 this time.

Sony is still banking on MS's bad PR from a year ago, and Nintendo is riding on the success of SSB to carry both of their consoles. So, it was up to retailers to make good bundles and deals for those 3 systems, and they failed harshly with the Wii U.

Just because I follow the business news of game consoles doesn't mean I indulge in them.

You think I'm negative? You want me to start liking AAA games? Then the market needs to make better AAA games, because I'm not going to blow sunshine up anyone's ass just to make them feel better about their hobby.
Click to expand...

Most AAA games are actually pretty damn fun, I understand not liking one due to personal taste but this website seems to have developed a complete disdain for gaming as a whole.

I get it, hating on AAA games is a thing, everyone here seems to do it, but for a website called the Escapist it sure seems backwards to me.

So if I lay off the snarky passive aggressive posts you'll stop being anti-games? If so I'll change my ways.

You know, the only thing I still don't get is the fact that they emphasize GTA5 comes with it. It has The Last of Us: Remastered! That alone makes the bundle worth it. It should be The Last of Us PS4 bundle...with some other game. But perhaps my bias is showing... But I find it really funny that the WiiU got curbstomped by PS4, Xbox One, and the 360 despite it being the perfect gift for the kids. Little surprised the PS3 sold less than it though.

Ticklefist said:
An Xbox One is what I'd get. If I want graphics I'll just buy a PC game. If I want console games the Xbox One is the only option.
Click to expand...

The PS4 has 95% of the same games and runs them better, and has more exclusive developers known for making better games. Xbox pretty much only has Halo and Sunset Overdrive to look forward to.

And I was an Xbox fan until this generation. I've owned both the original and the 360 whereas I haven't bought a playstation since the original (and I got a PS4 this weekend)

Doesn't suprise me, I play PC and I view the xbox as the best console to get as it has the "better" (acknowledging quality is subjective) exclusives, (IMO, Wii U aside) seeing as I play all the cross platform games on PC anyway. As for the whole "Hurr everyone already has the PS4" argument, out of all my friends only one person other than myself has the PS4, I know that's only anecdotal but still.

The fact that the PS4 has sold so many units mystifies me, I guess it's all the peasants choosing what's best for playing the cross platform titles. 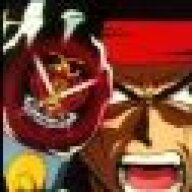 Atmos Duality said:
Apart from that, it looks like the two horse race to utter mediocrity just got closer. Woo hoo?
Click to expand...

Snarky derision has always been easier than genuine affection. It's why Yahtzee is popular, it's why Jim is popular. And, if we're honest, those guys are funny. "Snark" is funny and fun to indulge in once in a while. Plus, it's less likely that you'll be let down if you just assume everything sucks and wait for surprises rather than hoping things will be great only to be proven wrong.

Trust me on this one. I'm an optimist by design rather than choice. I wish I could snark it up and be all cynical. But when I'm truly honest, I'm usually hoping for the best from everything. And because of that, I'm constantly being deflated when things let me down. It's a drag, but we all have our cross to bear.

This year alone has been a terrible year to be saddled with optimism as a character trait (flaw). Master Chief Collection, InFamous: Second Son, Titanfall, Sunset Overdrive, Destiny... all games I had high hopes for and all of them had something about them that let me down. Some were obvious flaws, some were my own unmeetable expectations, and some turned a perfectly good shooter into an MMO.
Show hidden low quality content
You must log in or register to reply here.
Share:
Facebook Twitter Reddit Pinterest Tumblr WhatsApp Email Link
Top Bottom