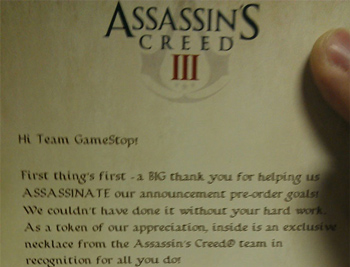 An unnamed tipster has photographed a note supposedly sent from Ubisoft to GameStop employees. The note thanks the employees for helping the Assassin's Creed III team "ASSASSINATE [their] announcement pre-order goals" - "assassinate" is in capital letters because it's a play on words, you see - before outlining the developer's plans for ACIII DLC.

If the note is legit, Ubisoft is putting together a second, complementary development team to work on "post-launch episodic content" to continue the "Game of the Year experience that Assassin's Creed III will undoubtedly deliver."

The Assassin's Creed series is no stranger to paid DLC, but most of it has been of the multiplayer variety. "Episodic content" seems to imply that the DLC will be suitable for players who enjoy stabbing Templars on their lonesome. There'll be a lot of it too, or at least enough to warrant sales of a "Season Pass" for the game.

"We'd love your continued assistance in informing pre-order customers that a better value is available for those who pre-order Assassin's Creed with the 'Season Pass,'" the note continues.

We'll get to see if that "game of the year" comment proves true when Assassin's Creed III launches on Xbox 360, PS3 and PC this October.

Well, as long as the DLC explains what's going on in the present time line with Desmond, I'll have less of a problem in general with the AC series.

I doubt they'll make it to episode 3. If you are trying to produce quality his episodic stuff just doesn't work. Oh wait, Ubisoft right? Carry on...

I dont belive you should put important plot stuff in DLC

Vault101 said:
I dont belive you should put important plot stuff in DLC

I thought we'd all figured that out already at the end of Brotherhood when Juno makes you stab her and, well I can't recall the dialogue from memory, but she pretty much all but says that you were being watched by Templars the whole time?

NinjaDeathSlap said:
I thought we'd all figured that out already at the end of Brotherhood when Juno makes you stab her and, well I can't recall the dialogue from memory, but she pretty much all but says that you were being watched by Templars the whole time?
Click to expand...

ah well to be honest I had no Idea what Juno was saying at the time....and distracted by "oh my god! oh my god! whats going on!?" I figured (for some reason) it was to remove any emotional ties Desmond mgiht have...or she was just really angry for some reason


it was made "somwhat more clear in DLC I hear
A

Grey Carter said:
An unnamed tipster has photographed a note supposedly sent from Ubisoft to GameStop employees.
Click to expand...

I'm actually really down with this, because it feels like ubisoft has been listening to us, when everyone was groaning about another game with Ezio, now their switching to episodic dlc to solve that so the next disc release will be Assassin's Creed 4

Has everyone forgotten the two DLCs for Assassin's Creed 2? The Battle of Forlí and the Bonfire of the Vanities were both singleplayer only content with storylines to compliment that of the original game. If these "episodic" DLCs provide some extra fun I don't see the big deal.

kman123 said:
Ah season passes. Never got one, doubt I'll get one for this. Looks like I'll be waiting for a neat little GOTY edition to wrap everything together.

I'll be waiting right along with you. The second I saw season pass and knew they were going for a subscription service (they can call it whatever they want but its a subscription) DLC for the main story, I knew I was going to have to wait for a game of the year addition.

I'm not going to pay 60 bucks to not get the complete story.

not a big problem for me. if its included with the collectors edition as they did with the black edition of AC2, why not. dint mind this dlc for revelations about lucy and subject 16. was an nice time waster with an surprising plot.

MoD1212 said:
I'm actually really down with this, because it feels like ubisoft has been listening to us, when everyone was groaning about another game with Ezio, now their switching to episodic dlc to solve that so the next disc release will be Assassin's Creed 4
Click to expand...

thats certianly an interesting way of looking at it

though I do feel for anyone who can't access DLC (yes, they do exist) you have no Idea how frustrating that can be
D

Yeah, because episodic content has worked so well in the past. What a flash of brilliance from Ubisoft here.

It's kind of difficult to ridicule Ubisoft very much considering that they are already one massive joke.

Grey Carter said:
An unnamed tipster has photographed a note supposedly sent from Ubisoft to GameStop employees.
Click to expand...

These guys just don't get it do they? They already have a ton of people who don't buy new games for whatever reason (personally I just can't afford the damn things) and instead of dealing with that, they're saying "we'll just make so much fucking DLC you basically have to pay for the game twice". Well done Ubisoft.

A series of DLC for what is shaping up to be the least interesting game in the franchise? I didn't get any of the other AC add ons, because after #2 I stopped caring more and more. I still got rev and bro but not for the plot lol. I didn't really get into the multiplayer, because for every cat and mouse session that rocks, there are 25 where idiots spam templar vision and the gun and run around yelling come at me bro...

I'll probably just watch LPs of it on YT like I do more and more these days for games I'm only mildly interested in. 100% of the time I am reassured in my decision to not buy them.

i.e. Dead Island, it looked pretty cool in previews but after reviews and actually seeing it in action...hell no.

My interest in this game just dropped even further. I was planning to try it if my sister buys it but I may just not even bother with it now. I was able to follow the story up to brotherhood but Ubisofts **** has just destroyed any interest I had left in the series now, which is too bad since I actually liked the story in 1 and 2.
Show hidden low quality content
You must log in or register to reply here.
Share:
Facebook Twitter Reddit Pinterest Tumblr WhatsApp Email Link
Top Bottom