Or, you know, he could've just been addressing you with the first paragraph and his thoughts in the second...kinda like I'm about to do right now.

Well, like alot of people are saying, this sounds alot better, though it's pretty much expected, RWBY's main cast was atrocious and only got marginally better in the second season. But they're amateurs, maybe they'll surprise me with the upcoming season and improve. These are a bunch of people that each have quite a bit of experience(or failing that, behind projects that were largely well received because of their contributions). Looking forward to it.

Then again, there's still the animation and sound effects that are glaring errors in the series...so this may not be enough.

Queen Michael said:
So the big question is: Will people insist that you need to watch it with the Japanese dub?
Click to expand...

That only works when the original is in Japanese, so I don't think so.
Click to expand...

Honestly, you'd be surprised at people; 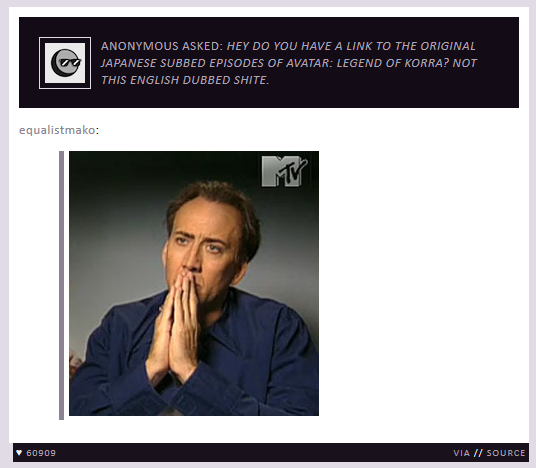 there was a running joke among some of the ATLA fandom to talk about how much had been cut out 'from the original anime', and how each episode had been so much better in japanese.
Show hidden low quality content
You must log in or register to reply here.
Share:
Facebook Twitter Reddit Pinterest Tumblr WhatsApp Email Link
Top Bottom