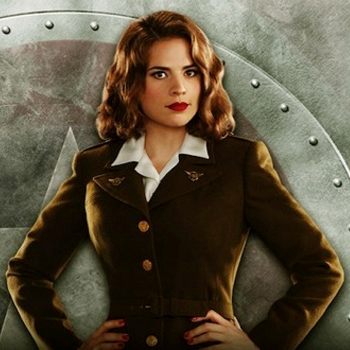 When Agents of S.H.I.E.L.D takes its mid-season break this coming season, the gap in new episodes will be filled by Agent Carter, a miniseries set in the late-1940s based around Haley Atwell's Agent Peggy Carter character from Captain America: The First Avenger.

Now, at Marvel's SDCC Television panel, Marvel's TV head Jeph Loeb has announced that Joe & Anthony Russo - who directed Captain America: The Winter Soldier - will direct the second and third episodes of the series, with First Avenger's Joe Johnston in talks for the fourth. Episode one will be handled by Louis D'esposito, a longtime Marvel hand who directed the original Agent Carter "One-Shot" that the series is based on.

The Russos cut their teeth as directors on television series like Community before breaking into features. Johnston is an old Hollywood pro, otherwise best known for directing The Rocketeer and the most recent Wolf Man feature.

So basically the first third of it will be by people we know are competent and whose work fits the general mood of the setting.

Sounds good to me.

Oh, it's only a miniseries. Well, fewer higher quality episodes might be the best. I'm excited.
S

I'm intrigued with this show. I haven't watched most of Agents of Shield, which I will get to eventually, but I loved Carter's character in the movie, so I really hope this is good. With finding out more about what she did after seeing the most recent movie, I have hopes that it will fill in some of the gaps. Even if it doesn't, as long as it's entertaining, I will be fine with.
Show hidden low quality content
You must log in or register to reply here.
Share:
Facebook Twitter Reddit Pinterest Tumblr WhatsApp Email Link
Top Bottom