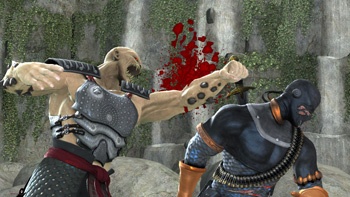 Sumner Redstone, the media mogul who sold a controlling stake in Midway for a measly $100,000, has been subpoenaed for what looks like insider trading.

When former Midway majority shareholder Sumner Redstone gave up his controlling stake of the beleaguered (and now smelly [http://www.escapistmagazine.com/news/view/89405]: Redstone and his daughter have been subpoenaed under allegations of insider trading.

It all really hinges on the enigmatic figure of Mark Thomas, a complete unknown who seemed to magically appear out of nowhere to scoop up Redstone's share of Midway. Apparently Redstone's agreement with Thomas granted him "preferred debt" which would give him exclusive dibs on any returns that the company would see in the process of repaying its creditors, and could figure up to $30 million.

Midway's creditors, seeing what they think is arguably the money they're owed suddenly being swooped up by this Mark Thomas, want to know more. They've conveniently run into a brick wall investigating Thomas it seems (curiously enough), but now their lawyers are demanding to take a closer look at the Redstones and have requested access to all their documents and records of communication with Thomas.