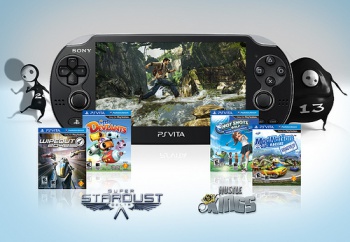 Select Sony titles will include both PS3 and PS Vita versions for no extra charge.

Sony announced a ton of new content for the Vita today, but the promotion dubbed "Cross Buy" seems like it'll have the biggest effect on the handheld's library. Under the new program, anyone buying select titles for the PS Vita will get a copy of the same game for the PS3 - and vice versa.

Both MotorStorm: RC and the recently-released Sound Shapes already offer pretty much the same thing, but those are relatively small, downloadable titles. This new initiative includes full retail games like PlayStation All-Stars, Ratchet & Clank Q-Force and Sly Cooper: Thieves in Time. Cloud saves mean you'll be able to continue your gaming between platforms, and some of the titles will include cross platform multiplayer.

"Consumers want to interact with their content at any time, across any number of devices," said SCEE president, Jim Ryan. "The game experience is no longer an individual pastime. It's an always-on, highly connected form of entertainment."

Currently, only first-party titles are being included in the promotion, but Sony would be wise to get big-name third party publishers on board. EA is the only publisher to respond thus far, and its response was predictably hesitant.

"We're taking it under consideration, but we have no specific plans to announce at this time," EA Corporate Communications told Forbes.

Cross Buy seems like a smart move on Sony's part. For relatively little cost, the company has made the Vita far more appealing to PS3 owners, and has taken the first steps towards combating the handheld's ongoing game shortage. [http://www.escapistmagazine.com/forums/read/7.384671-Vita-Having-Difficult-Time-Attracting-Third-Party-Support]

This Idea. I like it. ANOTHER! *breaks coffee cup*

So I can play the new Sly Cooper game in my living room AND all snuggly in my bed for no extra cost? Oh I like this, I like this a lot

Took Sony long enough to figure this one out.
Seriously, this should have been done at release. It's just good business

Finally, some GOOD news coming from the Sony quarter. This idea is what they should have done back when they announced the Vita in the first place.

It's about time. I love my Vita, but it's been a struggle to justify the damn thing.

Zombie_Moogle said:
Took Sony long enough to figure this one out.
Seriously, this should have been done at release. It's just good business
Click to expand...

This is what I was going to post almost word for word.

This should've been done at release.

It's about time, otherwise it wouldn't make sense to have those cross platform saves I had heard about, since buying 2 of the same game for different platforms both at full price would be downright ridiculous.

Sounds remarkably similar to what Nintendo told us about the WiiU (still a stupid name) at E3, oddly enough. Though, Microsoft pitched an idea similar to it as well, so maybe handheld/console switcheroos are the future. Present? Whatever, it's all still gaming, and it's a cool idea.

I don't know what is sadder, the fact that this is just now being added as a feature when they ALREADY had cross platform cloud saves, or that I had assumed it was already a feature of the Vita going from the apparently completely misleading ads they have been running and STILL didn't want a Vita.

The main thing, aside from a lack of any game I want to play, that I dislike about the Vita and by extension the PSP, Smart Phones, and tablets in general is quite simple to understand.

I love my DS because if I take it with me, and someone swipes it or I drop it or something (hasn't happened yet) they are relatively cheap and extremely easy to replace.

I don't need to have had any files backed up, sign a multi year contract, or pay for services that I don't want or need.

It plays games, is affordable and has generations of good games that I love to play, while being backed by a company that I actually trust for some reason with almost no reason other than they have never fucked me over before.

By contrast I could buy a new PS3 (which I have had to do for no reason) for about the price of a Vita and have access to a decent amount of games.

Unfortunate that we had to see Sony backed into a corner with Vita sales before they would do something that actually helps the consumer, but this is a good idea none the less.

Select Sony titles will include both PS3 and PS Vita versions for no extra charge.

Sony announced a ton of new content for the Vita today, but the promotion dubbed "Cross Buy" seems like it'll have the biggest effect on the handheld's library. Under the new program, anyone buying select titles for the PS Vita will get a copy of the same game for the ps3 - and vice versa.
Click to expand...

Its only the Ps3 version getting a digital copy of the Vita version - it doesn't work both ways. When you think about it, its pretty obvious - Vita games are always cheaper than their Ps3 counterparts, so why would you offer the chance to get the more expensive game for free with the least expensive version?

Thats also because of what this system is designed to do - yes, the most obvious thing is to make these cross platform extras available easier to the players, but aside from that, this system also allows people who only own the one Sony console to build a library - for free - of games from the other. And there are a heck of a lot more Ps3 owners without Vitas than there are Vita owners without Ps3's.
Click to expand...

Um... You do realize they announced it as working both ways? Every other site clearly says: Buy either the PS3 or Vita version. There would be very little point to this if it only worked one way.

Unless you're right and all of them are wrong. And no site even says digital. If it was digital only that would be stupid. The second copy will no doubt be digital, but the original will not be.

Awesome, hope some good games get this feature.

I think this should be done for all games on all platforms really, you've bought the game so you should have access to it on all platforms that it's available on. Anyway still a good move on Sonys part.

So would there be a way to transfer saved game files from the vita to the ps3 and vice versa? I'm not going to complain about a free extra game copy but it would be kinda silly to play a game on the ps3 and then totally repeat what you just did if you want to play it on the go with the vita.
Show hidden low quality content
You must log in or register to reply here.
Share:
Facebook Twitter Reddit Pinterest Tumblr WhatsApp Email Link
Top Bottom