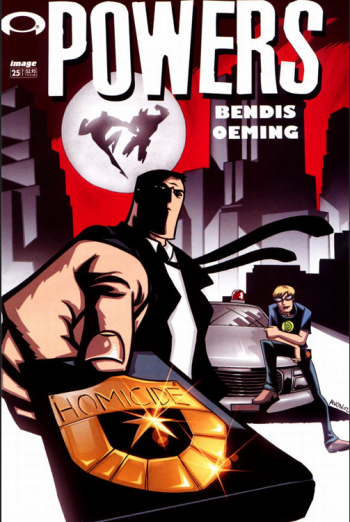 Sony Pictures Television is working on this US exclusive.

If you're a fan of Brian Michael Bendis' Powers series, then prepare to bounce off the walls with joy: there is a TV series coming soon. Hope you own a PS4 though, as it's coming to you courtesy of Sony Pictures Television as a PSN exclusive for the US only. Please remember to breathe. You seem to be going blue. Don't pass out.

This is a separate initiative from Sony's planned online pay TV service, which is still in the works. Yes, this isn't a million miles away from Microsoft's own attempt to make its console the entertainment hub of the living room, and yes, this being a US exclusive may be a cunning scheme on Sony's part to steal Microsoft's lunch. After all, very good so far [http://www.escapistmagazine.com/news/view/132620-PS4-Sales-Hit-Over-Six-Million-Units-Sold-Worldwide], and if ever there's a time to move in on the Xbox One's turf it's now. Sony's Michael Lynton says this initiative "is an example of why [Sony's] businesses do work very well together," and claims Powers was picked over other possible titles because the superhero police procedural would resonate with gamers, Sony's preferred demographic.

For those of you wondering who this fellow Bendis [http://www.jinxworld.com/] is and what the fuss is all about, Bendis is a five time Eisner Award winner who pretty much put the Ultimate Marvel Universe together, among other credits. His Powers series follows the career of detectives Walker and Pilgrim, homicide division, who investigate cases involving people with superheroic abilities. Walker himself was one such hero, before his powers were mysteriously taken away.

FX was supposed to be working on a FX [http://powerstv.com/] was still saying it wanted to be involved, it would seem Sony's offer was more tempting.

Charlie Huston [http://www.imdb.com/name/nm2555560/?ref_=fn_al_nm_1] will be scripting Sony's Powers series. There's no confirmed release date yet, and as for that US exclusive, while the rest of us may be gnawing the furniture right about now there's no reason to think this will be a forever deal. The US will get first showing, no question, but in the future there's always a chance Sony will license it out to other regions, after the US has had its fun.

Speaking as a PS3 (and, I'm sure, eventual PS4) owner all I can say is that I hope there'll be an eventual blu-ray/DVD release, or they make the video available to download/stream to my iMac. I hate the idea of tying any of my video content to just the one device in my house.

This is of course assuming it ever comes to the UK.
W