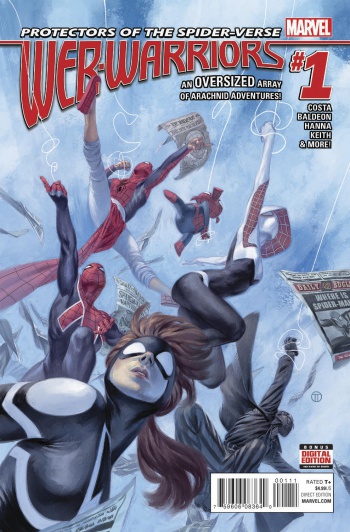 Marvel Comics' Web Warriors brings the characters of Spider-Verse into an ongoing series - including Spider-Gwen and Spider-Ham.

Last year's <a href=http://www.escapistmagazine.com/news/view/140565-Secret-Wars-Sends-Spider-Gwen-Back-To-Spider-Verse#&gid=gallery_4055&pid=1>"Spider-Verse" event certainly proved to be among the most memorable in Spider-Man history. In short, it brought together every published version of Spider-Man - <a href=http://www.escapistmagazine.com/news/view/138097-Marvel-Announces-Spider-Gwen-for-February-2015>and a few original creations - to face a threat to the multiverse. But apparently the concept is so successful Marvel doesn't want it to end. And so enters Web Warriors, a new ongoing series where Spider-Gwen, Spider-Man Noir, Spider-Ham, and others form their own super-team.

Following the deaths of countless Peter Parkers during "Spider-Verse", multiple dimensions are left without Spider-Man's protection. And since Spider-Men are a guilty sort, of course many feel responsible. In response, a group of heroes form a new home base on Earth-001 where they can quickly respond to any world facing a specific spider-threat. Their first mission? Taking down Electro, whose powers have grown to a level that threatens all of reality.

Web Warriors' line-up includes Spider-Gwen, Spider-Man Noir, Spider-Man India, Spider-Man UK, Spider-Ham, and Silver Sable, at least at first. Parallel dimensions are always of the sort that other characters could join or be swapped out as the series progresses. The series is written by Mike Costa (Scarlet Spiders) with art from David Baldeon (Nova).

And of course, since Web Warriors spins out of a successful Spider-Man event, you know what that means: <a href=http://www.escapistmagazine.com/news/view/139707-Spider-Gwen-Gets-Spider-Powers-In-Marvel-Comics-Ongoing-Series#&gid=gallery_3775&pid=1>Variant covers. Marvel has unveiled variants from Skottie Young, Tradd Moore, Humberto Ramos, and even a hip-hop version by Damion Scott. Meanwhile, the primary cover from Julian Totino Tedesco seems to be channeling Alex Ross. Web Warriors might be a silly concept, but it is one artists are having fun with.

Wow...so there actually is a Spider-Pig? Huh, I thought that as just a Simpsons gag.

Also I have a question as I really don't know about any of this stuff: has each one of these webslingers been bitten by a radioactive spider or what's the deal with there being a whole Spider-Team?

RJ 17 said:
Wow...so there actually is a Spider-Pig? Huh, I thought that as just a Simpsons gag.

Also I have a question as I really don't know about any of this stuff: has each one of these webslingers been bitten by a radioactive spider or what's the deal with there being a whole Spider-Team?
Click to expand...

they are all different variations of Spider-Man from different universes. Most of them have a similar origin, bitten by a radioactive spider, although the events of how it happened is different for all of them.

"Bitten by a radioactive spider, I discovered I had the powers of-"

This is a neat thing, though I don't read modern comics much.
R