Spider-Man 3 Composer to Score The Saboteur

Spider-Man 3 Composer to Score The Saboteur 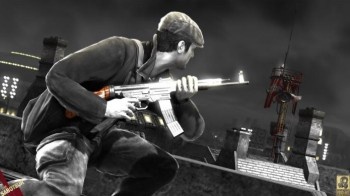 As if killing Nazis like some kind of mid-century MacGyver wasn't enough reason for you to drop your $60 on a copy of The Saboteur, the game's backing tunes come courtesy of Hollywood composer Christopher Young.

Admittedly, a quick trip to the Internet Movie Database might leave you doubting Mr. Young's work. After all, he's the guy who penned the score for Spider-Man 3 -- a film most notable for a single scene in which Peter "Don't Tell Anyone That I'm Super Bat Forbush Spider-Man" Parker dancemopes his way down a New York City street like the overly made-up love child of Tony Manero and Pete Wentz.

On the other hand, Young has also composed tunes for some of the better horror flicks of modern times, including Drag Me To Hell, Hellraiser, and the second Nightmare on Elm Street movie.

Then again, on the other other hand, he also proudly counts Queen Latifah's Beauty Shop, the Latifah-free American version of Japanese horror flick The Grudge and Nic Cage's Ghost Rider as part of his portfolio.

I could keep going back and forth contrasting Young's work on laughably bad films with his efforts on movies that probably didn't cause anyone to go blind, but neither of us have that kind of time. You can see the rest of his credits on his IMDB page [http://www.imdb.com/name/nm0002366/], but prepare to be left completely baffled by his schizophrenic career trajectory.

I'd like to say that The Saboteur is in good hands with Mr. Young, but reading up on his career only serves to cause splitting headaches and massive confusion. I almost hope Young selects projects purely to feed a rampant heroin addiction. At least then he could justify his work on Virtuosity

Let's all just hope the soundtrack to The Saboteur comes out more closely resembling 1999's The Hurricane (double points for the inclusion of a Bob Dylan song) or even the surprisingly awesome Tales From The Hood. If it's closer to The Dorm That Dripped Blood, well ... let's just say it wasn't even the best movie ever made about college housing with menstrual issues.

first its Hans Zimmer whos scoring MW2, and now this?

what next? is Mozard gonna rise from the grave to score WoW: Cataclysm?

That was one of my complaints about Spidey3; the mediocre score.

What the hell happend to Danny Elfman.

what next? is Mozard gonna rise from the grave to score WoW: Cataclysm?
Click to expand...

We can only hope

and Rex Tremendae makes everything THAT much more epic

...and Kyrie is just AWESOME
A

half the ingame music is completely generic crap taken from public domain libraries and the rest are licensed period songs, which are annoying and stupid, especially because they play EVERY time you get in a car(which is alot, unless you like walking 30 minutes between every shootout/conversation) and there's no way of turning them off other then muting the game altogether.

Music is crap and so is the rest of the game.