Square Enix Is Letting (Some) Fans Play FFXIII-2 In Advance

Square Enix Is Letting (Some) Fans Play FFXIII-2 In Advance 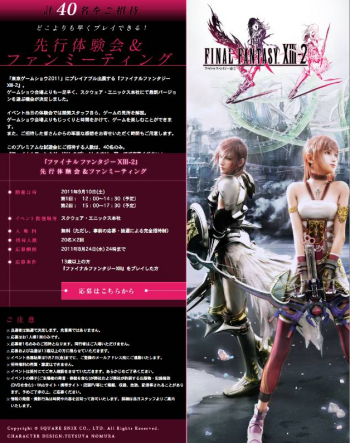 If you've been beside yourself over the wait for Final Fantasy XIII-2, then Square Enix has your back (so long as you're in Japan).

Square Enix has been rather surprising when it comes to stepping up the time table for Final Fantasy XIII-2. The game is <a href=http://www.escapistmagazine.com/news/view/111706-Final-Fantasy-XIII-2-Coming-To-North-America-In-January>due to hit North America in January, shortly after it's released in Japan. It's also going to be playable at the Square Enix booth at the Tokyo Game Show (which happens next month). Now, though, the publisher has revealed that it's going to let a few lucky fans play the game even sooner.

Square Enix has announced that it's going to hold an early demo event for the game and "fan meeting" on September 10th. The event will take place in the group's main headquarters, over in Tokyo's Siniuku Ward. Not only will players get to check out the game, but they'll also be able to meet the development staff. However, only forty people are going to be invited to this event.

If you're interested in attending the event (and can read Japanese), details are available over at Square Enix Members. Application to attend is open until August 24th.

ManThatYouFear said:
there problem is letting "fans" play it, biased little dribbling little prats praising it no matter how shit it is, if the want proper feed back, just let random gamers play it.
Click to expand...

The distinction between a "Fan" and a "Fanboy" needs to be drawn there. There are plenty of people who are fans of a product or company that are incredibly critical of that product or company. Fans should surely be the ones who have high expectations and desires for something, given their interest in it. By contrast, random gamers with limited interest in a game might not provide useful feedback about a game. As an example, I'm fully aware of Battlefield and Modern Warfare, but I'm not interested in either of them and even if I played them, the things I'd notice probably wouldn't be the same as someone who's been playing MW2 or Battlefield 2 alot. All I'm saying is that Fan isn't necessarily a 4 letter word, just ignorant, blind fans.

More on topic, I played FF13 and it didn't really astound me. I enjoy most RPG's, but FF13's characters just...annoyed me, and as everyone else and their dog has already mentioned, it was insanely linear. I can't imagine many people lining up to take a crack at 13-2. But hey, X was pretty good and it spawned and awful sequel, X-2, so maybe it'll work in reverse and the not so good 13 will spawn a good 13-2. 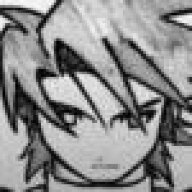 I've played the game on E3 and from what little I played I have to say:
You poor bastards you don't know what you are getting into...
R

I have faith that this game won't suck nearly as much as FFXIII did but I'm sure it won't be taking away game of the year or anything.

And yeah, where is Versus? It looked pretty cool. Way cooler than XIII turned out to be, anyway. Maybe that could've redeemed Final Fantasy--not another sequel... interquel... thingy.
S

RagnarokHybrid said:
I have faith that this game won't suck nearly as much as FFXIII did but I'm sure it won't be taking away game of the year or anything.

And yeah, where is Versus? It looked pretty cool. Way cooler than XIII turned out to be, anyway. Maybe that could've redeemed Final Fantasy--not another sequel... interquel... thingy.
Click to expand...