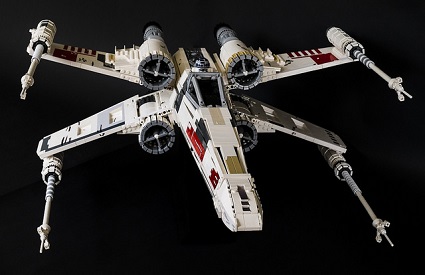 Flickr user crash_cramer has recently released images showcasing a custom built X-Wing more detailed than even the best of the official LEGO sets.

Of all the spacecraft to come out of the <a href=http://www.escapistmagazine.com/tag/view/star%20wars?os=star+wars>Star Wars franchise, the X-Wing is easily the most iconic. In addition to being the fighter that took down the Death Star, there's just something about its design that screams classic space opera. It's should serve as no surprise, in turn, that many over the years have tried to build the X-Wing out of LEGOs. The LEGO Group itself has <a href=http://lego.wikia.com/wiki/9493_X-wing_Starfighter>released <a href=http://lego.wikia.com/wiki/10240_Red_Five_X-wing_Starfighter>numerous construction sets based on the ship and, a few years ago, even went so far as to build a life-size model of the famous fighter out of its patented bricks. As nifty as some of the company's official sets are however, one fan's custom creation might just take the cake in the contest of plastic starfighters.

Built by <a href=https://www.flickr.com/photos/[email protected]/with/15686632284>Flickr user crash_cramer, the X-Wing in question is more than two feet long (78cm x 54cm to be exact) and 1/16 the size of what an <a href=http://www.escapistmagazine.com/news/view/124313-Team-Builds-Life-Size-X-Wing-With-Legos>actual X-Wing would be. The model, according to comments from the builder, was inspired by his desire to produce a LEGO brick X-Wing closer in shape and proportion to the design featured in the films. Basing his work on the <a href=http://www.amazon.com/Fine-Molds-Stars-X-Wing-Fighter/dp/B000WOX6C8>Fine Molds model kit, he produced this model after more than two years of work and "refinements".

Even with all that however, he still affirmed that the final build includes "plenty of compromises." Whatever there were, they aren't nearly as noticeable as the ones LEGO itself has made in its own attempts to recreate the classic spaceship. Even the company's best X-Wing pales in comparison to the sheer amount of detail included in crash_cramer's custom build. It's such a close recreation in fact, that I almost wish he'd follow the lead of LEGO Ideas. After all, if there's one thing we can't too much of in this world, it's X-Wings.

this is legit, but no thank you on trying to get this kit.

It's always interesting to see the many varied techniques used to add detail to a lego model. Especially ones that result from placing bricks at odd angles and just generally doing the seemingly impossible with them...
Show hidden low quality content
You must log in or register to reply here.
Share:
Facebook Twitter Reddit Pinterest Tumblr WhatsApp Email Link
Top Bottom