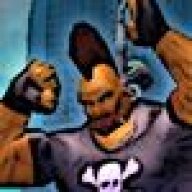 CUnk said:
Bioware is aware they are making an MMO, right? Everything I seen about this game implies otherwise.
Click to expand...

No, they're making a new version of KOTOR with an online multiplayer mode and a subscription pay model.
V

VanityGirl said:
Not sure I like this. I mean I like the companion, but making him "immortal"? An immortal companion just seems like it would make the smuggler too powerful. I'm not sure about this.
Click to expand...

Are you trying to be funny or do you really fail that hard?
I'm trying really hard not to flame you.

He's not immortal. Please, edumicate yourself a bit before posting.
Click to expand...

Please educate yourself before quoting me.

First off, to quote the OP of this news thread:

BioWare has revealed that the Wookiee warrior will be a companion for the smuggler class in the game. Bowdaar is impressively said to fight "without the benefit of armor or weapons," and is so good that some call him an "immortal creature who can't be killed." He was enslaved as a child and forced into arena fighting, where he's won 10,000 matches in 108 years, including the besting of a Jedi.
Click to expand...

While I realize that he's not 'technically' immortal, but you do know that if people are calling him immortal that it means it is NEAR impossible to kill him, which as I said in my post, "make the smuggler too powerful".
The whole making the smuggler too powerful should have been the main thing you took away from my post, but in your quest to try to be right on the internet, you failed.

I'm just kind of in a state of unease abou the character because having a super powerful wookie friend is cool, but it would do a few things(this is if the wookie is as powerful as people imply):
1. Make the class too easy to solo/level (no challenge=MMORPG fail)

2. Make the class too hard to fight in PvP, even if you're attacking the smuggler directly, the wookie will be beating you in the back and kicking your ass (if they have PvP, which they should)

3. Make EVERYONE want to be a smuggler.

I hate to say this, but WoW has the companion thing right. A hunter in WoW has a pet friend that is pretty handy, but can die pretty easy. Also the pets must be tamed and must have their happiness and health taken care of by the owner in order to useful.

1. Let's make a really expensive single-player game that customers have to subscribe to!

2. Don't bother creating your own character--we have literally TEN for you to choose from, already packaged to sell... well, rent.

3. It's okay, WE'LL put the words in your character's mouth. Hell, we'll even decide what he sounds like for you!