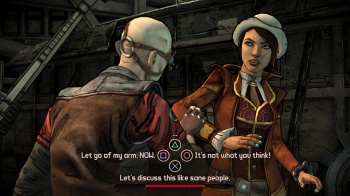 In an extreme case of "leaving it to the last minute," Tell Tale Games has announced that Tales From The Borderlands will launch tomorrow (11/25).

Original Story: Back in May, Tell Tale Games (of Sam and Max fame), announced that it would be producing a new adventure game series based on the Borderlands franchise: Tales From The Borderlands [http://www.escapistmagazine.com/videos/view/escapist-news-now/9156-Tales-From-the-Borderlands-Coming-Summer-2014]. At the time, we were told it would be coming in "Summer, 2014", but it was eventually pushed back to "November, 2014". As we were fast approaching the end of November, Tell Tale had yet to post a solid date, and many assumed that the game would be delayed again. Thankfully, in an extreme case of "leaving it to the last minute," Tell Tale Games has announced that Tales From The Borderlands will launch tomorrow (11/25).

This announcement means that today is the last day you can pre-order the title on Steam [http://store.steampowered.com/app/330830/] for a 10% discount (as of writing, you have 14 hours left until release).

It's certainly a nice surprise, especially since people were expecting bad news. The only problem I have with this release is that now I have another game to add to my "November New Release Madness" pile, alongside Warlords of Draenor, Dragon Age: Inquisition, and Pokemon: Omega Ruby.

Curse you, Holiday period, for forcing developers to all release at the same time!

thought they announced this last week.

Wait, what? Where the hell was I?

Only north america? Not on xbox? Well with my uk based 360, i feel a little miffed.
Actually thats a lie. I dont even know anything about this ...er...game?

Already? I mean, I'm not complaining, but for a while they have been saying it's not ready and that it will be available soon. So, I guess 'soon' means 'right now-ish'.

Is this really a surprise...? I've known this for like a month, since today is the day Steam has had the release date listed as for a while now.

I don't know how anyone could justify buying this as it will be in at least two Steam sales before it's completely released. I would also wait for reviews on something like this.

I'm interested, but I'm gonna wait a little while.

Mostly because I want to see some reviews. I've liked pretty much every telltale game I've played to date, but that doesn't mean they can't mess up(Jurassic Park was apparently terrible, in a strange fluke). TftBl will probably be another hit but I can wait.

Who needs reviews? They just played the entire 1st episode on stream at the Alamo Drafthouse (which I'd be at if it weren't for freaking exams). It looks like pretty standard Telltale fare with a dose of Borderlands humor. Basically, exactly what it says on the tin.

Bloody hell, I completely forgot about this. Is it a good or bad thing that they're announcing the launch in such short notice?

Halyah said:
But wasn't this just recently announced....? Is this a rush job then? I'm so confused! 6_9
Click to expand...

It was announced a long while ago.

Mostly because I want to see some reviews. I've liked pretty much every telltale game I've played to date, but that doesn't mean they can't mess up(Jurassic Park was apparently terrible, in a strange fluke). TftBl will probably be another hit but I can wait.
Click to expand...

I just picked it up myself and thoroughly enjoyed the first chapter. They definitely nailed Borderlands humor, and the story set up is pretty good so far. We'll see how it goes later, but so far definitely impressed.

Woah? Isn't this abit short notice? Either way I won't be getting it straight away for other reasons (too many games to play at the moment).

I knew it was coming out tomorrow for like a week now... Just saying.