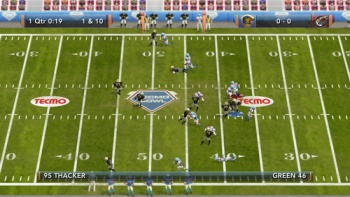 After months of suspense and speculation, we have an official announcement that Tecmo Bowl Throwback is coming to XBLA and PSN in Spring 2010.

I've made it no secret that I will play the crap out of any game that updates the heyday of Tecmo Super Bowl. The last time I wrote about it [http://www.escapistmagazine.com/news/view/98469-Tecmo-Bowl-Rated-By-ESRB-Totally-Coming-Soon], I was so excited that I went home and tried to get my old 8 bit NES up and running. I blew so hard into that grey cartridge that I was seeing golden stars. Alas, my old hardware had finally given up the ghost, with the ghost being the blinking, somewhat distorted opening sequence of Tecmo Super Bowl emblazoned in low definition glory on my HDTV. *sigh*

But now I won't have to just hold my old NES cart and cry, remembering bygone days of football yore, because I'll soon be able to download Tecmo Bowl Throwback on Xbox Live Arcade (or the PlayStation Network, if I were so inclined). Coming in "Spring 2010", there's no official word on how much it will cost, but, when it comes to this kind of game, does that really matter?

There are only a little official details but Tecmo Bowl Throwback will support online play against friends while also having various online leaderboards. I've said it before: running online seasons would be great but there is no word on that front.

There are 32 teams available to play, but, it is as I feared, Tecmo Bowl Throwback doesn't appear to have the NFL license. But with the ability to customize your roster, you might be able to recreate any team you want to. If they allow the distribution of custom rosters, then we'll soon see rosters mimicking current NFL players. Or better yet, historic rosters from 1991 or even 1986. That would be enough to make me do the Superbowl Shuffle [http://www.youtube.com/watch?v=fJNC3dgreaU].

The best part of Tecmo Bowl Throwback is that although the graphics get an upgrade, the developers at Southend Interactive [http://www.southend.se/index.php] in Sweden have preserved the simple gameplay. You can play in 3D, but I'll probably go back to the topdown 2D mode.

'Cause that's how I like my American football, people: made by a Swedish team, published by a Japanese company and played without any basis in reality.

The plays were chosen with a d-pad direction and "B" and I wouldn't have it any other way.

It was the simplest football game of all time, and there wasn't a magical hurdle over or spin-move button that made your RB invulnerable, it was just pure, simple, hilarious fun. Side-scrolling football with such a lack of identity in the teams that you could barely tell who was who (I remember playing as the Chiefs or something a lot, but I don't think they even used Kansas City colors...)

Either way, I'm really excited about this game - the screenshot looks just like the original with "updated graphics" which I guess is all a re-release needs, but it's the online play that actually gets me all giddy.

An excuse to post awesome music? Don't mind if I do!
<youtube=EjDQa517Qac>

I need to play this game, somehow.

hURR dURR dERP said:
An excuse to post awesome music? Don't mind if I do!
<youtube=EjDQa517Qac>

I need to play this game, somehow.
Click to expand...

hURR dURR dERP said:
An excuse to post awesome music? Don't mind if I do!
Click to expand...

It's awesome is what it is. The original was badass as well, considering the limitations of the hardware at that time.
<youtube=gtjnf24He-U>