The Wooster said:
That E3 Feeling

That's basically me.
It was the greatest night of my life until I stop being a virgin :'D
All it needed was a remake of the Crash Bandicoot games and it would have been the best thing humanity did since...well, anything xD

Yeah, this has been a really good E3. There was something for everyone...

Personally, I'm mostly interested in ME: Andromeda and the Bethesda stuff, though the FF7 remake is on my radar as a means for me to finally play that game (as the incredibly ugly graphics always turned me off).
R

Gotta say this has been the first E3 in a long time that's actually been worth watching. I'd say everyone so far has had pretty good presentations.

Going to be funny to watch the riot that ensues if Nintendo doesn't provide any details on a new Zelda game, though. =P 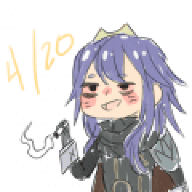 Matches my sentiments exactly especially when DOOM and the FFVII Remake previews happened.

What I like about is that it has something for everyone in store. While most will drool over Doom 4, Fallout 4, Mass Effect, and aaaaaall the other stuff, I'm happy about not being forgotten about with the Final Fantasy remake, Dark Souls 3 and Shenmue 3.

This E3 has surprised me. I was determined to generally ignore it but well Shenmue 3, The Last Guardian and a Final Fantasy VII remake all being announced on the same day is hard to ignore.

In retropect it was probably a good thing Ubisoft didn't announce Beyond Good and Evil 2. If that had also been announced I'm certain it would have ripped a hole in the universe

I'm my case, just repeat panel #2 with increasing amounts of vomit between each expulsion.

Then I catch my breath for a while when I hear that The Last Guardian isn't dead, after which I shortly continue.

It must be said E3 has been very good so far.

And its not over, with the Nintendo and Square Enix conferences today and still something to be revealed by Platinum.

Lots of great games announced.
Something for everyone.
But what I'm really here for is the stabs everyone is taking at everyone else...and we all know there have been a couple of good ones this year...

So true. I was following Jim's twitter yesterday, and the comments were a roller coaster of those four frames.

And then comes the cynical post-E3 analysis where they make their usual criticism...
T

I know, I'm excited for Cuphead too.

So, i'm in the minority then when i say: Not impressed with anything.

Jeah, Fallout 4 is nice but outside of that? Mainly it's the old "let's milk our franchises until they're dead and a little bit beyond that"-Shtick.

EA announcments: I'd like to see how Mirrors Edge turns out, the last one was intriguing but EA turning an interessting game into a franchise usually spells disaster.
Can't be bothered with ME4, that's not EA's fault though rather than myself + the internet. The huge shitstorm about ME3 started before i even could pick up the game. I had a lot of stuff spoiled for me and due to the "bad ending" drama my motivation to play it reached 0. Which is sad because ME1+2 were my most beloved franchise in a long time. I played through both of these about 6-8 times and to this day i didn't even buy ME3.
And i want to see SW:Battlefornt once it hits the shelves. Trailers are make-believe.

Ubisoft: Ghost Recon, Rainbow Six and AC #90812361. Just, ugh. But yay for South Park. Stick of Truth was great and i love me some SP. I just know already that we'll get these SP-RPG's every year now, if this one is succsesful too.

Microsoft: Only console stuff. I'm not their target audience.

Sony: They made so many horrible FF's in the past that they have to re-hash their best one. Desperation, great. Alot of franchise-milking goin' on here too but at least Horizon/Last Guardian can be something.

And then as mentioned: Fallout 4 and Dishonored 2, which i admit i'm thrilled to see how they pan out, but i just can't get the enthusiams for the E3 many other people apparently have.
Maybe i've been burnt to often by the false promises of these events and by the AAA-industry in general. I mean, Watchdogs looked really nice too until i bought it...

I've a strange feeling about Dishonored + Mirrors Edge for example. I liked both games but now that they're turned into sequels i can already picture them being a horrible mess trying to appeal to the usual "common denominator" and "a wider audience". Urgh.

"The Second Coming of Christ" indeed.