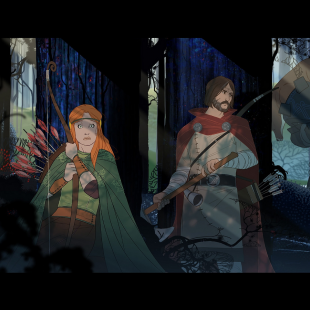 Stoic Game's <a href=http://www.escapistmagazine.com/tag/view/the%20banner%20saga>The Banner Saga will be coming to PlayStation 4 in "early 2015."

Update: Stoic Game's John Watson has responded our queries and revealed the PlayStation 4 edition of The Banner Saga has currently been in development for about four months and that it will take "several more months to get it to the finish line."

Watson also stated that Stoic is still very much committed to the goal of bringing The Banner Saga to "as many platforms as possible" and that the game was actually designed to be ported to other systems with relative ease. That being the case, he stressed that Stoic's small size is still a limiting factor that could prevent things like a Vita port, for instance, from becoming a reality any time in the near future.

"We're working out the feasibility of doing [more ports] sooner rather than later," he said. "We are still a very small studio with limited resources, so trying to crank out every port at once is a bit of a difficult, and expensive, proposition."

As for The Banner Saga's second episode, Watson assured us that he and his fellow developers are" cranking away on the next game as fast as we can." Sadly, he wasn't able to offer any sort of release window, but the fact that it's moving forward should hopefully satisfy eager fans.


Original Story: Earlier this year Stoic Games indicated that one of its potential projects could include console and portable ports of its hit RPG <a href=http://www.escapistmagazine.com/articles/view/video-games/editorials/reviews/10910-The-Banner-Saga-Review-The-Gods-are-Dead>The Banner Saga. It was a goal that the studio expressed some doubts about on account of its small size. That being the case, it would seem that those doubts were for naught as the game has now been announced for a 2015 release on PlayStation 4.

Unveiled today in an announcement on Sony's PlayStation Blog, a new version of <a href=http://www.escapistmagazine.com/news/view/135764-The-Banner-Saga-Could-Come-to-Consoles-PS-Vita>The Banner Saga was confirmed for launch on the PlayStation 4. The game, which will be released in a partnership with the indie publisher Versus Evil, was unveiled for an "early 2015" PS4 release alongside several other independently developed titles including Armikrog, Kyn and Toren.

The posting on the PlayStation Blog didn't provide anything in the way of a specific release date. Sadly, it also didn't give any information about the potential of a port for the Vita. John Watson, a programmer with Stoic, had previously said that "the game would be great on Vita" but also said that they wanted to "see it on PlayStation 4" before devoting attention and resources to a portable version. We've contacted Stoic to see if we can learn anything more about the PlayStation versions of The Banner Saga and will you know when we have updates.

I can really recommend the Banner Saga for anyone who likes tactical RPGs. The PS4 doesn't sound like it would be the prime target for it but I guess it'll work out.

Oh, I'm pleasantly surprised by the announcement. I've played 'Banner Saga' for about two hours at a firend's house (thus only scratching the surface), but was interested in what I saw. Plus I really like the art style, so it all boils down to a Day 1 purchase for me.
S

Honestly, I feel they'd have been better off holding back and releasing the full series on consoles as a single game once it's truly completed. I love the Banner Saga to bits and would rank it as the best new IP I've seen in years, but it simply does not feel finished at all. Not in a negative rushed way, just in a surprise credits roll way. Putting incredibly short content in a curated storefront breaks the expectation of full products with complete stories.
Show hidden low quality content
You must log in or register to reply here.
Share:
Facebook Twitter Reddit Pinterest Tumblr WhatsApp Email Link
Top Bottom