Everyone has a theory on how the X-Men will come to the Marvel Cinematic Universe - but is everyone overthinking it?

So no offense, but are we gonna get a different kind of episode that has nothing to do with the MCU, or Superheroes in general?

I agree. Not everything needs to be explained and it can often ruin your story when you do try to over explain things.

I do think the next X-Men movie should be a crossover where they team up with Sonic to collect the chaos emeralds before The Mummy can get them. 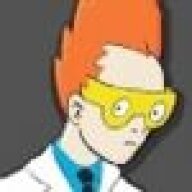 Because I have ComicBookCast2 for that.
Click to expand...

You'll forgive me if I hope his answer to your question is "nope."
P

I'm of the opinion that they should make "Deadpool 3" to merge the universes together in the most tongue-in-cheek, fanservice-y way possible. There's basically no way you can do a "Crisis on Infinite Earths"-type reality-merging storyline without it getting meta, and those kinds of stories tend to take themselves too seriously anyway, so making it a light-hearted Deadpool-focused story allows them to just focus on the fun silliness that has resulted from the decade-long pissing match between Fox and Marvel, lean into the meta stuff as much as possible, and then have it all hand-waved away at the end because Deadpool. Sure, they could just not do it at all, but I really struggle to think of anything else you could really do for a third Deadpool movie anyway, and I can't really think of a better send-off for the Fox X-Men Universe. 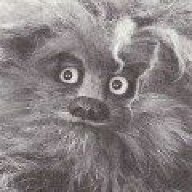 I skipped the previous episode thinking it was just a reposting of an old one.
But Bob's back at it again. God I've missed these.
D

Batman vs Superman was a really damn good movie and plenty of people liked it.
C

Oh man, I'm so happy to see The Escapist: The Return. My favorite content creators are coming back to help things get back to normal.

On topic, I'd love to see all the X-Men back in their weird looking underoos instead of boring black leather body armor.
A

Completely lampshading the event via Deadpool 3 I feel would be a great way to do it. One film of completely bombastic insanity and then it's back to serious business with the next installment.

I think an easy way to fix this would be to just say that mutants existed for a long time, but in relatively small numbers until like the 1940's. At which point the population of them started to increase because "radiation" or "Hydra" or something, but at this time SHIELD was around to cover it up. And now that SHIELD is gone, everyone now knows about them because the main people keeping them a secret are defunct. That way, you can have Wolverine (if you really need him at this point) and/or any of those other mutants you want who have been around for a long time, as well as a ready-made excuse why we're just now hearing about them.

As much as I'm against X-Men being merged into the existing MCU (I actually think mutants should be in a different universe altogether,) I think after the Sokovia accords you could kind of play the "all these people are getting their latent powers awakened, let's oppress them, Rawr" card without some bloated universe bending storyline to do it.

Just start with the original X-Men (5 teenagers in a mansion) and then introduce the new characters in subsequent movies to simulate the flow of time/new mutant powers awakening.

Since Fans want Wolverine/Deadpool NOW! You can have Wolverine be a long living person and the first to be identified as a Mutant in the Weapon X project, and Deadpool being the result of an experiment based on Weapon X to fast track them through the timeline.

Oh good, my favorite film critic is back. The one who completely ignores things like character development or coherent plots in favor of reliving his childhood action figure play times. The one who watched Scott Pilgrim and said, "Why don't MORE movies act like video games, where the protagonist receives an extra life or a mini-nuke?"

The hands down worst thing to ever happen to movies is the current comic book boom of shared universes and consequence-free plots. God forbid we have poignant, small scale movies where decisions matter. Instead, we DEFINITELY need to shoehorn in more characters to the point where top-billing means you get more than 5 lines to say (I seriously dare people to rewatch Infinity War and count how many lines Captain America has).

I'd honestly rather go back to the early 00's of teen monster romance and child wizard fantasy than see the comic book universe expand into more franchises. Because at least in those movies, someone dying meant they stayed dead, not resurrected through sheer force of merchandising value.
J

Superheroes only meet for coffee when it's the HISHE Universe starring Batman & Superman. 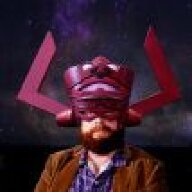 In the comics, isn't the origin of the mutants being that the use of atomic energy and weapons "activated" their genes? Hence the children of the atom stuff. Couldn't be that hard to pick an event from the MCU and say it was the activating event. I'm excited for the inevitable Avengers v X-Men movie, myself.
Also, Bob me ol' mate, Ragnarok was 2017 and 2018?

Correct me if I'm wrong but of the 2 episodes 1 is explicitly about superhero movies and the other is about blockbusters.

And now I want "Comics are weird!" to be Marvel's official, onscreen explanation for the crossover.

I think it's easy:
- Vision says in Civil War "In the 8 years since Mr. Stark announced himself as Iron Man, the number of known enhanced persons has grown exponentially," i.e. enhanced persons have existed before, but more are revealing themselves now.
- The MCU already has division between people who do and don't trust enhanced individuals in general, but lets say people are more afraid of Mutants because they're often younger and have more dangerous/unpredictable powers that they're not used to.
- Characters all throughout the series use 'enhanced' to refer to anyone with abilities, regardless of how they got them. I'd suggest that 'Mutant' is like an offensive slur people use to put down enhanced people, hence why we haven't heard them be referred to as such.

Put it all together, and: Mutants have always existed, but Xavier's School has done a good job keeping most of it quiet. However, the increase in public superhero activity has meant more young mutants not hiding their abilities, hence the seeming increase in powered people. The word 'mutant' itself is slowly becoming adopted by enhanced youths, in the same way other marginalised groups in the real world will co-opt once-offensive slurs as a badge of pride.

The only little detail about the X-Men that might need changing would be Magneto's origin, because at this point to keep his time in a Nazi concentration camp, he'd either have to have been an infant at the time, or he's nearing his 100th birthday (probably both). Ditto for Prof. X; for them to have been friends as young adults, they need to be around the same age... Unless you do something ballsy and have that be part of the plot of the movie, that they're both super old and looking for heirs to their causes...

These are somewhat interesting, have not really tried viewing them before.

Anymoo...the solution's simple, fam - it always has been - there is one and only one answer to any and all everything that encourages convoluted justification, especially comic book storylines;

Drop a portal, plop out the new characters and quip some bollocks about the multiverse.

There. Fucking done. It solves any potential discrepancy. Can't be effectively argued against. No effort or thinking required, and everybody does it. When do I get paid?