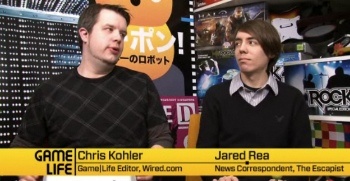 In which I attempt to teach Wired's Chris Kohler the subtle art of punching his co-worker in the face.

So when Wired editor and good friend Chris Kohler asked me to come over and show him a thing or two regarding Capcom's latest, how could I refuse [http://blog.wired.com/games/2009/02/gamelife-vide-1.html]? With nearly a decade of tournament experience and a good four months of Street Fighter IV play time on the general public, he couldn't have picked a better Mr. Miyagi to his Daniel LaRusso.

His opponent, Wired's Chris Baker, wouldn't be caught at a disadvantage, however. Not only was he armed with the current Cadillac of controllers, Seth Killian [http://www.escapistmagazine.com/news/view/88514-Street-Fighter-IV-Arcade-Sticks-and-Pads-Announced-at-Last].

The two of us, Seth and I, have tangled many a time, and I had a feeling that he'd attempt to properly train Baker. Knowing the crunch for time we were under, I opted for the opposite route: teach Kohler the cheap stuff right away. I taught him one thing: Sagat's forward roundhouse attack into Ultra combo. Did my power hungry, top-tier whoring tactics work in the face of Seth's patient tutelage? Will I manage to sell enough watch [http://www.youtube.com/watch?v=QwRISkyV_B8] to find out.

Nice teaching Jared, did 50 Cent ever get back to you on the other challenge?

I'll have to unlearn everything I know about SF3 first, but once I'm confident in my Tao of SFIV? We gonna throw down, son. 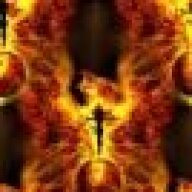 "This is going to be way harder than Double Dragon". - Classic.

Seems like you taught more of the fundamentals while Seth tried the path of least resistance. Good see the training paid off.

I said wow every time.

I'll have to unlearn everything I know about SF3 first, but once I'm confident in my Tao of SFIV? We gonna throw down, son.
Click to expand...

Nothing like a good sports movie analogy to get fellow underdogs on-side. Also what's with all the argyle sweaters?

Now you are bringing the coasts into this?!? Alright, it just got hella serious...

West coast is the best coast!

Now you are bringing the coasts into this?!? Alright, it just got hella serious...

West coast is the best coast!
Click to expand...

Pffft! Standard West-coast fighting game snobbery! Just because you guys have, uh, most of the arcades and, um, a good portion of the serious competitive players...