The Hobbit: The Battle of the Five Armies Official Synopsis Burrows Out

The Hobbit: The Battle of the Five Armies Official Synopsis Burrows Out 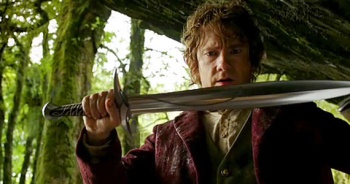 Warner Bros. has finally released the official synopsis for Peter Jackson's concluding tale to The Hobbit trilogy, Battle of the the Five Armies.

Just this April, director Peter Jackson announced that he's changing the title of the final The Hobbit film from There and Back Again, to the more aggressive, The Battle of the Five Armies [http://www.escapistmagazine.com/news/view/133979-Final-Hobbit-Film-Renamed-The-Battle-of-Five-Armies] since it's more "appropriate." Well, now, you can judge that for yourself as Warner Bros. has released the film's official synopsis in full. You can check out the complete presser below, which was translated from its original German release.


From Academy Award&#174;-winning filmmaker Peter Jackson comes "The Hobbit: The Battle of the Five Armies," the third in a trilogy of films adapting the enduringly popular masterpiece The Hobbit, by J.R.R. Tolkien.

"The Hobbit: The Battle of the Five Armies" brings to an epic conclusion the adventures of Bilbo Baggins, Thorin Oakenshield and the Company of Dwarves. Having reclaimed their homeland from the Dragon Smaug, the Company has unwittingly unleashed a deadly force into the world. Enraged, Smaug rains his fiery wrath down upon the defenseless men, women and children of Lake-town.

Obsessed above all else with his reclaimed treasure, Thorin sacrifices friendship and honor to hoard it as Bilbo's frantic attempts to make him see reason drive the Hobbit towards a desperate and dangerous choice. But there are even greater dangers ahead. Unseen by any but the Wizard Gandalf, the great enemy Sauron has sent forth legions of Orcs in a stealth attack upon the Lonely Mountain.

As darkness converges on their escalating conflict, the races of Dwarves, Elves and Men must decide - unite or be destroyed. Bilbo finds himself fighting for his life and the lives of his friends in the epic Battle of the Five Armies, as the future of Middle-earth hangs in the balance.

It seems Jackson did the right thing renaming the final chapter. But even so, I'd be very surprised if he somehow didn't work in the phrase "There and Back Again" in the film in some form or another.

The Hobbit: The Battle of Five Armies is set to hit theaters in the US on December 17 later this year.

I can't wait, I loved the first two... now excuse me while I prep my flame armour.

There is something that is just so whimsically atmospheric about Peter Jackson's take on middle earth. It endears all of the films to me.

Nah, I preferred the original name for the third. It seemed much more fitting for being a end of The Hobbit Trilogy, as opposed to an important event in one movie

Sounds like it's just going to be one long battle scene, i think i'll pass considering how bad the action was in the previous Hobbit films. Though admitedly, the second one wasn't as bad as the first one, if the first one was Phantom Menace the second one seemed more on par with Revenge of the Sith, which could mean that this one wll be as awful as Attack of the Clones , i hope i'm wrong, but i'll wait for the dvd to find out.
G

I hate Thorin's character, his face, and his voice. It will be satisfying to see him kick the bucket in the 3rd movie.
E

I am looking forwards to this movie, since it will finally deliver the ending that the last one missed.

Sadly though, this new movie will thus lack a beginning. But hey, we already got that one last year!

"There and Back Again" will be the retail name for the full 3 movie extended edition boxed set.

God-dammit brain, you were supposed to skip right over any mention of this thing so I could motor on in ignorant bliss.

What the... this synopsis actually resembles the plot of the books! Really well, in fact. I mean, I'm sure Tauriel's gonna show up again and ruin everything, but for the time being I can at least delude myself into thinking that he's actually trying to write an adaptation instead of a fanfiction this time around.

P.P.S. Edit: I totally missed the Sauron bit. That's pretty off. In fact, the books make it distinctly clear that the Misty Mountains orcs are not under Sauron's command. He had some in Dol Guldur, but those ones were never involved in the battle of five armies. I guess now it's the battle of six armies, so good job there Peter Jackson.

Sauron sending Orcs? Why?! To desperately try to connect the Battle of the Five Armies to the newly invented subplot that Gandalf and Radagast got?
I actually recently read the Hobbit again (yes, triggered by watching the movies) and it's made very clear that these are Goblin tribes out for revenge (for what happened in the Misty Mountains) and plunder and of course their grievances with the other peoples there. It has nothing to do with Sauron.
Sigh. I wish Jackson would stop adding new stuff in. That said, I especially dislike it when he cuts content from the original, not simply for time as you would expect, but actually to make room for the new stuff. It's not merely added on but replaces other things. And that's just wrong.
S

These movies have not been as good as the Lord of the Rings movies, and it kills me to say that. However, I'm still looking forward to seeing the conclusion. I've enjoyed the movies, just not as much as I was hoping I would.

Please, please, please take the lines from the original animated movie when they all join forces:

(Thorin) "Oh Great Elf King, my truest friend and ally. We must join our forces against this common scourge."
(Elf King) "But of course, oh noble King Under the Mountain. Your people are like brothers unto mine."
(Bard) "And my men and all their weapons are as one with yours. Together we will vanquish the foul foe."
(All three) "Together!"

I'm sorry, but I have always felt that those lines capture perfectly the absurd situation and how silly Thorin is being. Now, I know in the book that Thorin is still in the mountain at this point, but Jackson has already changed so much...
A

MrBaskerville said:
which could mean that this one wll be as awful as Attack of the Clones , i hope i'm wrong, but i'll wait for the dvd to find out.
Click to expand...

At least Attack of the Clones didn't shoehorn in Han Solo, Lando, and Bo... okay, well, at least Boba was given the right amount of focus, and not "LOOK AT ME LOOK AT ME SEE I PLAYED AN IMPORTANT PART IN THIS TRILOGY TOO!"

"The Hobbit: The Battle of the Five Armies" brings an epic epiconclusion to the epic adventures of Bilbo "Epic Epickson" Bagginsepic, Thorin "RECLAIM OUR HOME IN AN EPIC OF EPICKS" Oakenshield and the Company of Epic Dwarves. Having rendered the actual villain of the entire novel a mere footnote, the Company has unwittingly unleashed a deadly force into the world. Enraged, Smaug does to Lake-town what everybody was hoping to see in the second movie, but you already knew it was going to happen, so expect Jackson to not even try to make Smaug much of a focus.

Instead, watch a long, drawn-out version of Thorin doing what everyone expected him to do in dry-humping his gold in a pretentiously overblown fashion, as Bilbo's attempts to make him see reason, which will also be long and drawn out to pad out screen time, drive the Hobbit towards a desperate and dangerous choice...which everyone already knows as giving up the Arkenstone to make peace with everyone, except the way Thorin was characterized will make it seem like Thorin is less outraged and insulted like he was in the actual novel, but here completely mouth-foamingly psychotic towards Bilbo. But there are even greater dangers ahead, I mean, fuck, didn't you read the movie's subtitle?. Unseen by any but the Wizard Gandalf, the great enemy Sauron has sent forth legions of Orcs in a stealth attack upon the Lonely Mountain, a great shock...!...unless you watched the last movie.

As darkness converges on their escalating conflict, the races of Dwarves, Elves and Men must decide - unite or be destroyed. Which considering the world of man isn't destroyed in The Fellowship of the Ring, you already know they're not, putting prospective audiences in the mindset of "this is how the good guys win," effectively killing any kind of tension on who lives and who dies. Which is Fili, Kili, and Thorin, by the way. Bilbo finds himself fighting for his life and the lives of his friends in the epic Battle of the Five Armies, as the future of Peter Jackson's directorial reputation hangs in the balance.

If I had one word to describe this entire adaptation, it'd be "pretentious." The fight scenes that didn't happen in the book are pretentious. The decision to not only shoehorn in characters that weren't in the novel, but actually focus on them...is pretentious. Attempting to make this story's tone clearly contrast the source material (sans the Battle of the Five armies, the one thing that actually warrants Two Towers' Helm's Deep tone) is pretentious. The expanded barrel ride portion of the story, which once again ended up as another fight scene, is pretentious.

I had rather hoped that the third film would take advantage of the fact that several of Bilbo's adventures went undocumented on his return trip to Hobbiton. But I guess we need another battle scene. Movies based entirely around one battle tend to wear out very fast, it's why Deathly Hallows part 2 is really weak compared to other films in the Harry Potter series.

How much of the 3 hour run time does he expect to devote to the battle?

I'll just be glad "shoehorned invincible dwarf action sequences" will be over with. I just can't enjoy the second Hobbit movie, it never takes a rest from perfectly choreographed fight scenes that go beyond suspended disbelief and into superman territory... except when it forces in the love story with the prettiest dwarf in the land.
Show hidden low quality content
You must log in or register to reply here.
Share:
Facebook Twitter Reddit Pinterest Tumblr WhatsApp Email Link
Top Bottom