The Second Map from BF1: They Shall Not Pass is Now Live for Premium Owners

The Second Map from BF1: They Shall Not Pass is Now Live for Premium Owners

//cdn.themis-media.com/media/global/images/library/deriv/1419/1419388.jpgYesterday marked the launch of the second map from the Battlefield 1 They Shall Not Pass DLC, as well as a week long free trial of Premium.

If you're a Battlefield 1 Premium Pass owner, you may have noticed that a new map dropped yesterday. Named "Prise de Tahure," DICE says that the map is "set in the hours just before dawn in a small countryside town that serves as the arena in the fight over the Champagne-Ardennes region. Players will fight as the French or German army in high intensity, close combat battles over the control of the Tahure region."

If you are not a Premium Pass member, you may have also noticed that you have access to that map. Why? Because yesterday EA kicked off the first "Premium Trials" event for BF1. Until July 27, all the maps from the BF1 Premium Pass are available to everyone. That means you have a week to check out all the additional maps, the French Army, the Frontlines game mode, and more.

It is worth noting that you will only receive experience on the DLC maps if you actually own the Premium Pass or that specific DLC. Otherwise, your XP will be saved for you, and will be added retroactively if and when you purchase the additional content. There's one other restriction: DICE says that, "only owners of a Battlefield 1 Premium Pass or the specific expansion pack can spawn in with weapons and vehicles unique to the expansion."

The Premium Trials event will end on July 27, with similar events planned prior to Gamescom and in September. You can find more information over on the official Battlefield website [https://www.battlefield.com/news/article/premium-trials-play-new-maps-for-free].

Now, will this be playing in the background while on that map?

I am pretty disappointed with BF1. None of the amazing gunplay that had me hooked into BF4 for 400 hours. How they have not fixed that yet is beyond me. I really hope BF2018 does the Korean war because I am hankering for a mix of Vietnam and WWII era weapons.

I seriously cannot wait for the Season pass to disappear, as well as map pack DLC. Other than Halo 3, It has always been super difficult to find a match with the multiplayer DLC content a few months after release, as all it does is fracture and split the playerbase, until all of the servers just revert back to the vanilla content. No clue why they have decided the bundle this free content in with Premium/They Shall Not Pass, instead of just releasing it to the entire playerbase.

Much like Bob_McMillan, I sunk 400 hours into BF4, yet I have maybe put <10 hours in BF1, despite owning it since December last year. I really cannot stand it. Brutally, I think that it is my least favourite Battlefield game to date. 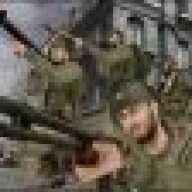 So far, I love the new map. This map and the other night map have been an absolute blast to play on so far. I agree with everyone else though, premium needs to go since it honestly does split the player base up a fair bit. Here's hoping that in the future they follow with Battlefront 2 and offer all the maps to everyone.

As for the game itself, it is my second favorite in the series next to Battlefield 1942. It's funny cause a lot of people cite to BF3 and 4 as being their favorites yet those were the least favorite for me personally. I have more than 400 hours in BF1 and only 223 for BF4. I think it has to do with the gunplay for me. I like the slower rate of fire, and longer time to kill (except those shotguns... god they're the worst) also no auto locking bullcrap. I guess its different strokes for different gamers but I'm glad this was released for players like me.
Show hidden low quality content
You must log in or register to reply here.
Share:
Facebook Twitter Reddit Pinterest Tumblr WhatsApp Email Link
Top Bottom