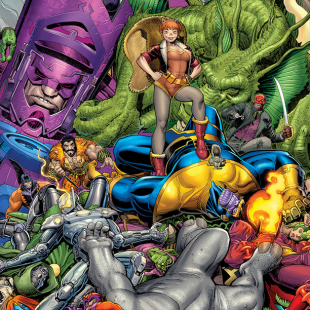 Unbeatable Squirrel Girl will be written by Ryan North and feature art from Erica Henderson.

If there's one thing that <a href=http://www.escapistmagazine.com/tag/view/marvel>Marvel has been rocking lately, it's been humorous comic series that focus in on the lighter side of superheroism while still telling interesting, addictive stories. Heck, between books like Ms. Marvel, Silver Surfer and She-Hulk, there are some weeks where I spend more of my comic reading time laughing than anything else. It's looking like Marvel intends to keep that streak going because it just announced a new series centered on arguably its most gloriously silly superheroine: <a href=http://www.escapistmagazine.com/tag/view/squirrel%20girl>Squirrel Girl.

Revealed in Entertainment Weekly (thanks for the images, EW), the new series is being dubbed Unbeatable Squirrel Girl and will launch in January 2015 with writer Ryan North and artist Erica Henderson at the helm. The book itself will focus on the titular character as she tries to juggle her career as a college student with her duties defending the Earth from cosmic level threats. And if you think the latter part is a joke then you don't know your Squirrel Girl. In her very first appearance she took down <a href=http://static.comicvine.com/uploads/original/12/124784/2985419-7081243885-Squir.jpg>Dr. Doom and, over the years, has gone toe-to-toe with countless Marvel heavies including Wolverine and Thanos, all of whom she defeated.

While we'll confess to being excited about the prospect of another female fronted superhero book, we will admit to being a tad perplexed as to what inspired Marvel to give Squirrel Girl a new ongoing series. Granted, this announcement isn't too much a surprise. The company, after all, did <a href=http://www.escapistmagazine.com/news/view/136592-Will-Marvel-Studios-Next-Big-Star-Be-Squirrel-Girl>file a trademark to protect its rights to the character back in August. Setting that aside however, Squirrel Girl is perhaps still more of a cult favorite than a Marvel mainstay and it just seems like there'd be more obvious characters for the publisher to invest new money in. We've reached out to Marvel to learn more and will update you when we can.

I hereby object to the quotation marks around "Unbeatable"-- wait, um, specifically in the title and not in this post I'm currently typing.

The art style is reminiscent of Archie.

Calling it now: new member of the Avengers.

Prepare to see Squirrel Girl on the Big Screen.

Finally a super hero I can related to.

I've never been one for comics (or comic books, anyway; I'm a huge Calvin and Hobbes fan, and, though it's a graphic novel and not a comic, I've recently become a big Scott Pilgrim fan), but this has piqued my interest.

Ok I admit, I loved the second cover image!

Last time I've check, she is the babysitter for Luke Cage and Jessica Jones child or has the child grown up without needing too much supervision or Luke and Jessica are looking after their child more?
T

Where Squirrel Girl goes... Can a return of the Great Lakes Avengers be far behind? Cuz... I really want that to be a thing.
T

I am not even joking, put Squirrel Girl in the Avengers movie. Hopefully against Thanos.

Who would you cast? I'm thinking Chloe Moretz or Anna Kendricks.

It's not a surprise decision though Squirrel Girl is sitting neatly in that teenage girl spot besides Adventure Time and Bee and Puppycat, this is gon' sell crazy well.

josh4president said:
Calling it now: new member of the Avengers.

Prepare to see Squirrel Girl on the Big Screen.

Won't happen, as it's the running joke of Squirrel Girl that the Avengers won't take her for various reasons. Mostly because she's Tony Stark's ultimate fangirl.

Also I think part of the reason they greenlit this is her fandom has remained, and within Marvel Heroes she's consistantly popular and played. Like we needed another reason to watch Doreen's adventures of insanity.

SG is the original gangster of squirrel ladyhood. Plus her name is less of her being a squirrel anthro like Makoto, and more that she literally controls squirrels. Like, HORDES of them.

well... i'll be adding an 11th series to my monthly comics spending. it's like they're trying to bankrupt me.

Yeah, but...She beat Thanos. Where does she go from here? Gritty reboot?

Being both a rodent and a woman?
N

StewShearer said:
...Squirrel Girl is perhaps still more of a cult favorite than a Marvel mainstay and it just seems like there'd be more obvious characters for the publisher to invest new money in...
Click to expand...

Oh, kind of like how Guardians of the Galaxy wasn't a Marvel mainstay?

Being both a rodent and a woman?
Click to expand...

Because clearly the people at Marvel have been monitoring the escapist forums and they have seen the posts where we are all saying we want to see Squirrel Girl be in one of their movies. Now they are just taking the first step to making that happen.

I don't know anything about her outside of what I've read online, but she sounds adorable and fun, and I think that third picture proves it. I would love to see her in an actual movie, if that's what the master plan is behind all of this.

Please forgive my terrible comic-fu, but why is this character unbeatable?

Also it seems like that joke would get stale fast. Maybe it's because I have dealt with a lot of sparkle dogs and Mary Sues online, but I just don't find this idea very funny outside of the initial "haha".

You'd think that but then again deadpool still moves comics despite the style of self aware humour having its limit as well. I think she mainly exists to "take the piss" out of the super serious "gritty" popular characters and remind everyone that its not real. Any character that wolverine fears is a win in my book. Although it must be said I'm somewhat biased as I am literally playing her right this minute in Marvel Heroes 2015 chucking hulkbuster and gamma irradiated squirrels at bosses.

Being both a rodent and a woman?
Click to expand...

Gritty reboot would be entirely antithetical to her backstory and character. She went through time to save Speed Ball from being a dark, gritty character named Pennance.


xPixelatedx said:
Please forgive my terrible comic-fu, but why is this character unbeatable?

Also it seems like that joke would get stale fast. Maybe it's because I have dealt with a lot of sparkle dogs and Mary Sues online, but I just don't find this idea very funny outside of the initial "haha".
Click to expand...

I saw a quote from somebody that basically goes: "So a super hero in a ratty rodent costume who continuously beats every bad guy they come across and never loses? Works pretty well for Batman." And that's how they would pitch it. Doreen Green is a likeable Batman.
Show hidden low quality content
You must log in or register to reply here.
Share:
Facebook Twitter Reddit Pinterest Tumblr WhatsApp Email Link
Top Bottom