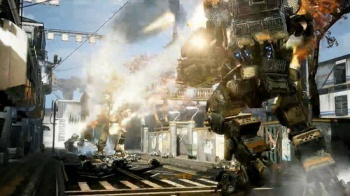 Titanfall Abilities and kit details revealed, players will be able to customize two load-outs, one for the pilot and another one for the Titan.

Following our report last week that Titanfall alpha invites were being sent out [http://www.escapistmagazine.com/news/view/131378-Titanfall-Alpha-Trial-Invites-Being-Sent-Out] to select Xbox One owners, footage of the alpha has made its way online -- and with it, details regarding the shooter. According to leaked videos -- which we won't post directly here -- Titanfall players will be able to customize two load-outs, one for the pilot, and one for the Titan. Pilots, who will be your primary character doing the running and gunning, will get a primary weapon, an anti-Titan weapon and a sidearm. In addition to the weapons, pilots will also have a slot for "Tactical Abilities," an Ordinance slot for grenades and two kit slots.

Tactical Abilities include a timed cloak, while examples of kit slot items include a Power Cell which will recharge your Tactical Ability faster and a Minion Detector that reveals Grunts and Spectres controlled by AI. As for Titans -- what the game calls its mechs -- it gets only one weapon, but it's insanely powerful. The rest of the Titan's load-out options are the same as the pilots and these include a Regen Booster for the mech's shield, an Auto-Eject mechanic, a way to make your Titan degrade slower called "Survivor," and Nuclear Ejection, which acts similar to Martyrdom from Call of Duty -- but instead of dropping a grenade upon death, the Titan explodes for damage. Lastly, Titans will also have access to Core Abilities, which will be available in-game after a countdown once you've hailed a Titan.

If you want to see the game in action, YouTube has a few videos uploaded by people breaking their NDAs for some of that internet fame. In other Titanfall news, the game will be "really tough" to market according to Respawn [http://www.escapistmagazine.com/news/view/131258-Titanfall-Really-Tough-to-Market-Says-Respawn] since it won't have your traditional single-player campaign.

Every bit of news I hear makes this game more and more underwhelming. It pretty much tanked its appeal (for me anyways) by not having a single player campaign. Mechs are always cool but when you remove the campaign, you remove the context for having them. Now they're saying that the Titans only have one weapon? Did the devs even think that players can be a bit like Jayne Cobb "I just get excitable as to choice... like to have my options open".

No thank you. I like my mechs with missiles, and PPCs, and autocannons, and the list goes on.

Huh, this actually sounds like an interesting setup. I'm curious what the range of options for each of the customization slots will be.

Also, that Nuclear Ejection sounds a lot like something from Mechwarrior/Battletech. Some of the games featured the ability to self-destruct your mech as a way to kill your opponents "from the grave".

Regardless, I'm hoping Respawn decide to do an open beta after the alpha run. I'd like to try the game before release, if only to confirm whether or not it's as good as it seems.
W

Yeah. What's the point of a house sized killing machine if it can only hold one weapon at a time? I'd expect at least one anti-vehicle weapon and one anti-personnel weapon. Even tanks get that.

weirdguy said:
Yeah. What's the point of a house sized killing machine if it can only hold one weapon at a time? I'd expect at least one anti-vehicle weapon and one anti-personnel weapon. Even tanks get that.
Click to expand...

I'm a bit dubious on that part of the OP. Every video I've seen of Titanfall in action has shown at least one clip of a Titan firing a primary weapon and a shoulder mounted weapon. I've also talked with several people who've played the game at expos/conferences/etc and they claim the same.

So...I don't know. Maybe the alpha build being demoed to a select few doesn't have those secondary weapons implemented yet? Guess we'll find out soon enough.

The trouble with the leaked Alpha footage is just how exactly like CoD it looked and felt. The little voice over and mode announcement was very CoD and even the primary weapon reload was the M16/M4 rapid magazine change that's been around since CoD4. Even the little kill replay camera was the same.

Granted it's what was meant to be a closed Alpha but there's going to have to be some serious rebuilding and polishing done to avoid getting thrown into the like Call of Duty but... pit of oblivion with Homefront and Medal of Honor. It's going to take more than to give EA their mega hit, God knows they should have learned this in the three years since MoH2010 made precisely nobody excited.


weirdguy said:
Yeah. What's the point of a house sized killing machine if it can only hold one weapon at a time? I'd expect at least one anti-vehicle weapon and one anti-personnel weapon. Even tanks get that.
Click to expand...