Everyone is involved. Omni 'ported everyone to the top of the T tower. However, Cat and Omni are behind a circle of black flames.

At least I know where I am now. *Normality*

Could you react to, you know, seeing Cat die.

Gallant's eyes shot open as he saw Cat punctured by the blade. Before Omni even had time to look at the ring beyond a second the young hero lunged forward. He came to the wall of black flame and smashed into it, beginning to force his way through even as it burned him alive. As his face got through he looked at the carnage and shouted "You'll die for that!" before slamming his fist through as well.

"Will I now..." Cat was lifted by a black shadow. "Well, good luck with that." He placed the ring on her finger and disappeared taking the blaack flames with him. Cat fell back to the floor.

I am quite the cold person.
*Flash events leading up to the death of Catgirl*

Falling to his knees with his eyes wide and mouth open "....No..." crawling over to her body and holding her in his arms "No...." starts to tear up. "....Damnit...DAMNIT!" tears flowing down his cheeks holding her body closer. Standing up with her in his arms and then rears his head to the sky and howls.

Gallant stepped closer to Lycanthrope and the body of Catgirl, attempting to think of what he could possibly say to make him feel better. But before he could decide, something else took precedence. He grabbed Lycanthrope and ripped him away, shouting "Get away from her!" He pointed at her hand, where the black ring now rested. "When the hell did that get there?"

Cat-girl laughed like a madman, raising slowly till she was standing. "Well would you look at that..." She lifted the hand with the ring on. "I'm a Black Lantern!" She ran forward and grabbed Gallant and Lycan's faces, lifting them up as she began to slowly fly upwards. "Look at how helpless you were to stop this! To stop my death! You must be ashamed of yourself, maybe if I had more a competent team I'd still be alive!" She threw them back onto the roof of the T Tower.

Gallant hit the ground, hard. He attempted to move, but found himself unable to to. Something about Cat-girl's words stung. And it weakened him. With a great effort, he lifted himself up, and shakily stood to face the figure up in the air. He put his hands up in a fighting position. "Black Lanterns are evil. They are not the people we think they are. Everything they do is to weaken you, to make you question yourself." He spoke these words for his own benefit more than anyone else's, but he hoped his allies might be bolstered by it.

Letting out a yelp of pain as he's slamed into the roof, he gets up on his two feet and looks up at Cat-girl's face, now with a feral animalistic look in his eye. "Grrrrrr......." *In his mind he is in a foggy area with a entity infront of him that appears to be chained up "...Let the beast free for now." the chains immediately break." He jumps into the air and turns into his werewolf form and charges for her with full force. Letting out the howl of the killer.

Cat-girl smiled. "The more your emotions show, the weaker you are." A black construct of a hand grabbed Lycan and another backhanded Gallant off the T tower. The hand around Lycan tightened, crushing him slowly.

Gallant sailed off the tower, a turmoil of emotion swirling within as he attempted to figure out what to do. But before he even knew himself, the cries and whimpering of Lycanthrope reached his ears as his fellow Titan was crushed to death. He slammed into the ground, making a huge crater. A moment afterward Ed shot out from his shallow grave and leaped back up above the tower, so high that he reached Cat-girl, and threw a powerful haymaker at her, snarling "Stay away from my friends!"

Only growling more with rage. His power wells up and explodes in a furry, destroying the construct and propelling him straight at Cat-girl. Howling with enough force to knock Cat-girl back and tackling her straight off the roof and plumiting into the ground.

The haymaker seemingly did nothing to Cat and as she was knocked off the tower with Lycan she smiled an evil smile. She broke Lycan off her and punched him down with great force. She flew back up. "Gallant, Gallant, Gallant. Always so naive, do you think your 'friends' really care for you back?" She charged at him and grabbed him Flying towards the city. She burst threw several buildings then threw him through the clock of Big Ben, smashing the glass.

Out of the rubble of Big Ben, Gallant jumped out holding one of the massive clock's arms. "I don't know if they care about me or not. But I care about them! That's why I'll protect them!" He threw the arm as if it were a javelin, aiming to either crush or pierce the Black Lantern.

Cat was impaled by the hand and she laughed. A black construct cut the arm that Lycan was holding onto off, sending him back down. With the other arm she pulled the hand out. "Ta ta for now!" She threw it back at Gallant and flew off, gone in seconds, to regenerate.

Gallant was smacked by the clock hand, knocking him back into the tower's walls, causing him to fall back down to the street. He lifted himself up and walked over to where Lycanthrope had hit the ground and extended a hand to pick him back up. 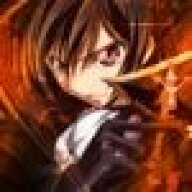 "What's going on out there, leave me be, you gotta help the others."
She said, finding herself some stregnth to get back up on the bed, and lay down with a sigh, and a yawn.
Whatever they are fighting, it is powerful, but I still need some recovery...
She sighed, and looked up at the ceiling.
I need to get control of this power, and I should be able to battle in a minute, especially since it is the full moon...
An orange crescent moon slowly started to glow in her left eye.
Only on the full moon am I able to skip a phase of my powers, and be able to use the next level with ease, but this has a good effect with it... The user is locked into only using those powers.
She rubbed her left eye, and yawned again.
Not to mention the fact that you are sleepy during this process


Sorry, had to setup a new computer, doesn't look like I missed alot.

Clawing away Gallants hand and then turning at him, almost ready to kill but then his body forces himself to the ground. As he is growling at Gallant he turns back to normal, exhausted, and crying.
Show hidden low quality content
You must log in or register to reply here.
Share:
Facebook Twitter Reddit Pinterest Tumblr WhatsApp Email Link
Top Bottom