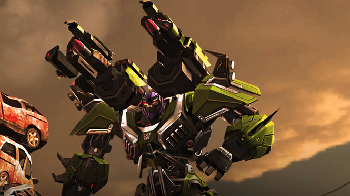 "One shall stand, one shall fall."

The open beta for Transformers Universe is now live. Those who wish to play can register an account on the official Transformers Universe [https://www.transformersuniverse.com/home] website and either download the client or opt to play in browser. To celebrate, a myriad of events are currently underway- including a Double XP weekend, $75,000 prize pot, and a 24 hour Livestream on their official channel beginning July 5th.

Another competition will bestow rewards to those with high referral numbers via the Recruit-a-Friend system, with $5,000 awarded to the player who recruit the most friends. Second place and below receive between $2,500 and $1,000

Transformers Universe is a massively multiplayer online game from Hasbro Games and Jagex, the studio behind Runescape. Set in the Transformers Prime universe, players take control of either an Autobot or Decepticon and engage in both PVP and PVE gameplay. Having undergone many changes since its initial announcement back in 2011 [http://www.escapistmagazine.com/news/view/110607-New-Transformers-MMO-Details-Roll-Out], a full release is planned for an unannounced date later this year.

Autobot or Decepticon? Let us know in the comments!

I think it's a MOBA. 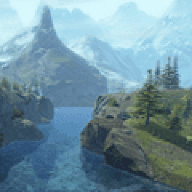 I think I'll pass on this, game seems kind of "janky". I believe that was a buzzword used once to describe a game in the past.

It's not all bad, but it controls awkwardly, and it's made in Unity, which comes with all the baggage that carries.

Oh, and it's kinda aimed at children, so the Decepticon commander is way too nice for a Decepticon, and playing as a Decepticon will pit you against mostly children who barely understand the game rules(but want to be an Autobot ).

I'd sure like to try it, at least give it a chance but after making an account, it won't let me log in. It says my e-mail and password are incorrect (which is entirely strange as I've gone to pains to make sure everything is typed out properly) and the only difference comes when I change the IP address at the bottom but it fails to connect, just hangs on 'connecting...'
R

I love that they added some female transformers to lore on some level, and did awesome with the designs, IMO, but I'm just not all that into competitive gaming. People get nasty.