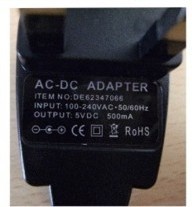 Trading Standards officers in the U.K. are warning that "hundreds of thousands" of unsafe chargers for Nintendo DS [http://www.nintendo.com/ds] and DS Lite systems have flooded the market, presenting a significant danger to owners of the systems.

The chargers are being imported from China and are now widely available through both retail locations and online dealers, but the devices are prone to overheating and can cause electrocution, according to a BBC [http://news.bbc.co.uk/2/hi/business/7514426.stm] report. Testing has shown that wires become detached after being used "for awhile," leading to a risk of electric shock, while the plugs do not properly fit U.K. outlets, which causes overheating. One high-risk device is labeled as item number DE62347066, while another has no code and is simply called a Travel Charger.

Making things worse, Senior Trading Standards Officer Chris Holden said the investigation has revealed that some of the devices are stamped with a false CE safety mark [http://www.berr.gov.uk/sectors/sustainability/regulations/cemark/page11646.html]. Recalls on the chargers have been issued by trading standards authorities, but Holden said massive quantities of the devices are already in the country. "The U.K. appears to be flooded with them," he said. "It probably runs into the hundreds of thousands or even millions." Holden added that while a properly constructed and tested charger typically sells for around $30, these devices could be purchased online for as little as one-third that price.

The Trading Standards recall notice can be read in full here [http://www.tradingstandards.gov.uk/cgi-bin/newsitem.cgi?file=safe1008.txt&area=safe].