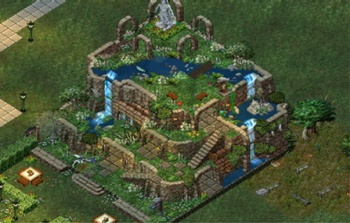 Mythic's Ultima Online may not have World of Warcraft's subscription figures, but it's still outlived multiple console generations.

It may not be the world's first MMO, but Ultima Online still has a great many achievements to its name. It was a staple of online RPGs. But perhaps its greatest achievement is the simple fact that Ultima Online is still running a full 15 years since its launch in 1997, making it the longest running MMORPG ever.

"I personally have worked on Ultima Online for more than 13 years," said producer Bonnie Armstrong, "and I'm still inspired by our players and actually learn something new from them every day. We truly have any amazing community who have been responsible for keeping the game alive for 15 years."

Produced by Richard "Lord British" Garriott and set in the Ultima universe, Ultima Online and its eight expansion packs practically inspired the entire MMORPG genre. The game allows players to design characters using 58 skills and a wide range of occupations (including lumberjack!) before unleashing them into a massive fantasy-themed sandbox world. Ultima Online has even received seven Guinness World records, including first MMO expansion pack, first implementation of player housing, and even first in-game ecosystem.

Ultima Online doesn't see the same kind of numbers today that <a href=http://www.escapistmagazine.com/news/view/118411-League-of-Legends-Topples-World-of-Warcraft-as-Most-Played-PC-Game>World of Warcraft or League of Legends does, but what it has done is impressive nonetheless. The game has managed to survive three distinct console generations, not to mention my entire high school and college careers, all while enthralling its dedicated playerbase. In a marketplace where <a href=http://www.escapistmagazine.com/news/view/117133-The-Old-Republic-Population-Shrinking>a brand new triple-A MMO still fails spectacularly, it's heartwarming to see that the achievements of Lord British and the Mythic team are standing the test of time.

I played for pretty much from 1999 to 2006. A lot of the principles that made it great I found in World of Warcraft.

I remember reading about some of the things they tried to implement on UO (may have been on here actually!) like the accurate wild mob food chain cycle that had to be scrapped as players made the wolves extinct and stuff.

Actually got the urge to play it now.

I still have an active acct, and house on the LS server. First started playing in 97. I've played pretty much every mmo that has come out, and none have ever really captured what UO did. Not saying others weren't fun, but none had the same magic. I haven't played it in a few years, even though I keep paying for it haha. I guess I don't want to cancel the game, because it will feel like the end of an era for me.

So how many players does it have?

GamerMage said:
Ultima 9. That is all.
Click to expand...