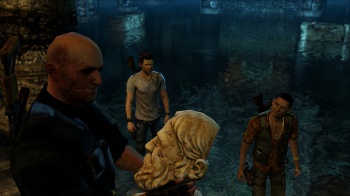 In addition to the new maps, Naughty Dog's community strategist, Eric Monacelli, announced that the team had added "dynamic lighting effects, new particle effects and a slew of technical changes" in order to "make [the maps] really fun in the Uncharted 3 multiplayer ecosystem." Monacelli went on to write that the new map set "is a taste of how far [Naughty Dog] can go to remix some of your favorite maps into a completely new Uncharted 3 gameplay experience."

Currently, the maps are available for free to all members of the Fortune Hunters' Club, a paid subscription to Uncharted DLC that currently costs $24.99. The maps will be made available to the public in due course for a price not yet announced.

Character packs are next on Naughty Dog's agenda, arriving in the near future as a follow up to today's release. Players can look forward to the Rogues 1 and Rogues 2 packs, which will include both major and minor thugs from the series. The developer will also soon be releasing Donut Pack 1, which will include corpulent versions of the game's generally Olympian-bodied cast.

Monacelli also teased new additions to the online adventure mode, referencing the screenshot above while asking: Any guesses to why Lazarevic is holding half a Janus head?

I'm going to go out on a limb and answer: "because he's looking for the other half," but hey, folks, feel free to draw conclusions about this epic mystery for yourself.