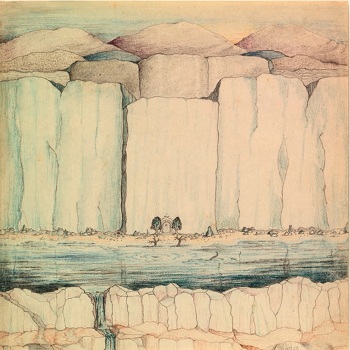 Ring in the 60th anniversary of the Tolkien's magnum opus with the one sketch book to rule them all.

J.R.R. Tolkien was, if nothing else, a master of world-building. In the twelve years he spent writing The Lord of the Rings trilogy, Tolkien meticulously crafted a vivid and incredibly expansive universe that has arguably never been surpassed by any work of fantasy literature -- save maybe The Worm Ouroboros, E.R. Edison's 1922 novel which Tolkien undoubtedly drew inspiration from. But I suppose that's kind of like comparing apples to petty-dwarf roots.

Though he was oft criticized for his overly dense descriptions, it was Tolkien's profound respect and admiration of nature that led to such beautiful passages as this one, a personal favorite of mine from The Fellowship of the Ring:

The sun, already long fallen from the noon, was shining in a windy sky. The pent waters spread out into a long oval lake, pale Nen Hithoel, fenced by steep grey hills whose sides were clad with trees, but their heads were bare, cold-gleaming in the sunlight. At the far southern end rose three peaks. The midmost stood somewhat forward from the others and sundered them, an island in the waters, about which the flowing River flung pale shimmering arms. Distant but deep there came up on the wind a roaring sound like the roll of thunder heard far away.

Talk about setting a scene.

As any Lord of the Rings fan knows, Tolkien's propensity for devoting entire paragraphs to the shape of a tree was sometimes not enough to satisfy even him -- and where words failed, he picked up with drawings. In an effort to both convey Middle Earth's overwhelming geographical layout to his readers and keep track of it in his own mind, Tolkien would often rely on sketches to aid in his narration. Whether drawn on parchment paper or Oxford examination booklet, Tolkien was relentless in ensuring that the landscapes he had created as part of Lord of the Rings were conveyed properly.

So to ring in the 60th anniversary of his legendary trilogy, publishing house Houghton Mifflin Harcourt is releasing a massive collection of the drawings upon which Tolkien's lush Middle Earth was created.

From Tolkien scholars Wayne Hammond and Christina Scull, The Art of The Lord of the Rings by J.R.R. Tolkien boasts more than 180 sketches, diagrams, maps, and early drafts of his invented alphabets from The Lord of the Rings. Over 100 of these sketches have never been seen before, but lucky for us, Wired has managed to get ahold of a few preview images from the collection, which hits bookshelves tomorrow and has already reached #1 bestseller status.

The individual descriptions for each image is as follows (via Wired/The Bodleian Libraries, University of Oxford):

Image 1: "Helm's Deep & the Hornburg" Tolkien doodled on almost anything he could get his hands on. Here, he drew this view of Helm's Deep, the fortress retreat of the Rohirrim people, on a half-used page of an Oxford examination booklet.

Image 2: "Plan of Shelob's lair" Dungeons & Dragons players might have been inspired by this map of Shelob the spider's den had they known of this drawing's existence. If only D&D had been invented in 1954, when The Lord of the Rings was published, not 1974.

Image 3: "Moria West Gate" This colored pencil drawing of the Doors of Durin, the secret entrance to the mines of Moria with its famous "Speak, friend, and enter" riddle, captures the scale and majesty of the location.The tiny tentacle of the Watcher in the Water, poking out of the water, hints at the Fellowship's trouble ahead.

Image 5: "Orthanc (2), 3, (4)" Tolkien used his illustrations to test ideas for how Middle-earth's various buildings, places and geological and man-made (and dwarf-, elf-, and hobbit-made) features might appear, and guided how he might describe them in words. Here's an early, three-part sketch of Saruman's tower Orthanc, at Isengard.

Image 6: "Map of Rohan, Gondor, and Mordor" Tolkien used maps such as this one to compute the exact locations of Frodo and Sam as they walked across Emyn Muil and the Dead Marshes and arrived at Mount Doom, so their arrival coincided with the parallel plotlines of other members of the Fellowship.

Image 7: "The 'First Map' of Middle-earth" This was Tolkien's master reference map. His son Christopher Tolkien called it "strange, battered, fascinating, extremely complicated." Its layers of sheets and corrections "reacted," he said, to the story in progress.

Image 8: "Distances and dates in Mordor" Our quest is how long? In this complicated sketch-map, Tolkien worked out distances between various stops along the quest, such as the fact that it was 20 miles from Osgiliath and the Cross-roads of Minas Morgul, just to the west of Mordor.

These are really nice -- with all the gilt-edged editions and reverential treatment, you tend to forget that Tolkien was just an obsessive hobbyist working out distances between imaginary locations on the back of some scrap paper much like all those hundreds of thousands of teens playing AD&D that he inspired.
S

Great. Because I'm not buying enough books coming out tomorrow.

October is turning into an expensive month.
T

Your opinion about novels by ER Edison is not news.
Your favorite passage from LotR is not news.

Why is this in the news section of the site?

Travis Fischer said:
Your opinion about novels by ER Edison is not news.
Your favorite passage from LotR is not news.

It's more interesting then "8 Disney Princesses Drawn as Clowns" or whatever. Personally, I enjoyed seeing Jared geeking out over Tolkien. I didn't even know about this, I'll have to pick it up this weekend. I don't really see the problem.

Tolkien was crazy. Linguist, painter, author, poet, scholar... Where did this guy find the time? Seriously, if anyone hasn't seen his full, completed artbooks, check them out. He was actually a pretty accomplished artist in his own right.

Travis Fischer said:
Your opinion about novels by ER Edison is not news.
Your favorite passage from LotR is not news.

So they can slip in a quick advertisement for a new book without it actually being called an ad? Call me a cynic, but...

That looks fantastic. As a long time fan of Tolkien (owing much of that to my mother's obsession with his stories) this is the sort of thing that's right up my alley.

Thanks for the heads-up, Jared. I might have to treat myself to a copy for my birthday this month.


Travis Fischer said:
Your opinion about novels by ER Edison is not news.
Your favorite passage from LotR is not news.

Because this is a geek news site? And letting people know of a soon-to-be released sketch book of Tolkein's art, in celebration of the 60th anniversary of his Rings trilogy, is exactly the sort of news fantasy and literary geeks are looking for, perhaps?


silver wolf009 said:
So they can slip in a quick advertisement for a new book without it actually being called an ad? Call me a cynic, but...
Click to expand...

Given that the editor, publisher, etc, have no ties to The Escapist nor its affiliates, I'm failing to see how this is a "cleverly disguised ad". What possible incentive would The Escapist have in promoting this book?

Jesus-jumped-up-Christ, people have become so cynical around here. Apparently nowadays a geek news site reporting on geek-related news is nothing more than a conspiracy.
E

Vigormortis said:
Jesus-jumped-up-Christ, people have become so cynical around here.
Click to expand...