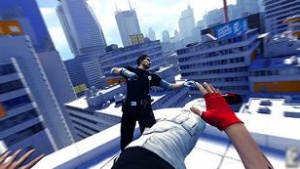 Variety's "Cut Scene" blogger and E3 Awards voter has disagreed with the wins for Gears of War 2 and the "gimmicky" Mirror's Edge.

Ben Fritz, Variety games reporter and Game Critics Awards panelist, participated as one of 36 game journalists voting for the "Best of E3" awards this year. This year, his vote once again disagreed with the majority of his peers, with only two of his picks (Spore for best PC game and Pure for the racing genre) winning their categories. However, he supports the victories of Fallout 3, LittleBigPlanet, Dead Space and Left4Dead, all titles he says have "the potential, based on the limited time I got to see them, to be fantastic."

Although he doesn't dislike Gears of War 2, it's too "Gears 1.5" for his liking, especially compared to Resistance 2, which he feels to be a "more dramatic leap forward" for action games.

Fritz found Mirror's Edge, the winner for "Most Original Game", to be more "gimmicky" than "substantive".

"The first person perspective really didn't work for a game where you're trying to manipulate a character through complex spatial puzzles, and the challenge often felt more about timing (can you jump off this ledge with enough speed at the very last second?) than brains," he explained.

His personal "Game of the Show" was Fable 2, which didn't bring home any awards.

Not a fan of the first game, Fritz thinks, "Fable 2 looks like it really will deliver on developer Peter Molyneux's promises. The combat system is amazingly simple, but can be leveled up in complex ways for those who care. The open-world roleplaying elements look like they're really tightly integrated into the story, rather than being utterly pointless like in Fable 1."

Source: The Cut Scene [http://weblogs.variety.com/the_cut_scene/2008/08/notes-from-an-u.html] via Computer and Videogames [http://www.computerandvideogames.com/article.php?id=195106]

Yeah I'm a bit dubious on GoW2 myself. Not that it won't be great; it just won't be a decent leap forward.
S

I can't help having a feeling that he is right about Mirrors Edge. While the game looks quite creative it doesn't seem like it will be a huge leap forward for gaming.

Fable 2 will be awesome or bland.

Gears 2 isen't trying to be anything else but Gears 1.5.

Oh wtf, opinions on the internets, who really cares?

What a cynic. And the whole (insert game here) 1.5 thing is plain stupid. I feel that the best sequels are either refinments or new takes, not dramatic changes. After all, if something is good don't you want more of it?

Indigo_Dingo said:
I still don't see why people are looking foward to GeOW II (stop calling it GOW II, you idiots - God Of War II had that title back in 2007)
Click to expand...

I'm more than aware of that but God Of War isn't mentioned in this article is it?
R

Indigo_Dingo said:
I still don't see why people are looking foward to GeOW II (stop calling it GOW II, you idiots - God Of War II had that title back in 2007)
Click to expand...

I'm more than aware of that but God Of War isn't mentioned in this article is it?
Click to expand...

I know, but it still is frustrating. Like people referring to Austria as Aus.
Click to expand...

Why not just stop being a lazy typist entirely and type out the whole thing? Gears of War 2
That wasn't so hard. Abbreviations and shorthand are fine for texting but really have no place coming out of a device that has a full keyboard.

As for this guy, I really can't say much for him if he brings such weak arguments against Mirror's Edge (which I'm excited enough about that I'll probably buy it straight out come November which I almost never do without a demo or prior experience).

Admittedly there is a reason that other games of this sort generally use 3rd person: first person doesn't give you a good sense of the space around you and makes moving precisely difficult. However, the apparent emphasis on speed and always moving forward would should help greatly if the levels are designed with this in mind, which appears to be the case. Also, its not brown. That in and of it's self makes Mirror's Edge special. I'm just praying they do a good job with the PC port.

The fact that he is willing to give Fable 2, a game made by Peter 'The Overreacher' Molyneux, the benefit of the doubt but not Mirror's Edge makes me question his sanity.

He's probably right about Mirrors Edge, but the problem is that I loved F.E.A.R's combat so much because it was first person, that I can't wait for Mirrors Edge no matter how gimmicky.

The what now? Mirror's Edge gimmicky? For God's sake, can you name even ONE game that is not gimmicky besides Spore? The games industry is slowly grinding to a halt at the imagination front. There are no new concepts that can be done with the current technology, so it's pretty pointless to go around saying "bah, I saw THAT before". All the mainstream ideas are done, only the indie front has some new stuff.

On the other hand, I am too looking forward to play Mirror's Edge. It's something fresh: It has colors! It's not the, as Yahtzee put it, gunmetal-gray and dogshit-brown theme, as with almost all the games nowdays. Gawd, I don't even have that much gamma on my monitor to see what's going on. Oh, a Mirror's Edge doesn't have sewer level.

Playbahnosh post=7.68335.627497 said:
The what now? Mirror's Edge gimmicky? For God's sake, can you name even ONE game that is not gimmicky besides Spore?
Click to expand...

I dunno, I think that whole creature creator is pretty gimmicky...

That and the fact that I seem to remember playing this game back when it was called SimEarth. Yes, I'm sure there are major differences and whatnot, but it just _sounds_ like the same old same old to me.

Wait....is this the same guy that raised all that fuss about Civ: Colonisation? Pffft...

As for Mirror's Edge...seems a little arty to me, I'm not sure if that's in a bad way or not. But, certainly one I'd take a look at if it does well.
I

I was wondering the same thing. Yes, it's the same guy. [http://weblogs.variety.com/the_cut_scene/2008/06/civilization-iv.html]

I was wondering the same thing. Yes, it's the same guy. [http://weblogs.variety.com/the_cut_scene/2008/06/civilization-iv.html]
Click to expand...

Right, then this guy's opinion is worth shit... regardless, it's just another person's opinion. I myself am not looking for anything more that Gears of War 1.5 from the sequel, simply because I found the gameplay quite fun without the need for any significant changes (though it would be nice if the made running seperate from the other functions). Fable 2, on the other hand, looks nice, but isn't for me. Different things for different people.

Any flak Mirror's Edge and Spore get for being gimmicky just proves my theory that the gaming market really doesn't know what it wants at all.