Dirty Hipsters said:
His proportions are too normal and human. He's not bulky enough, not comic booky enough. It's a step up from his design in spiderman 3 but he's still not physically imposing enough. I want him completely dwarfing other people.

It's kind of like when Lou Ferrigno played the Hulk versus the modern version in terms of the size difference between what we have and what I want.
Click to expand...

Yeah, that's how I felt too. Before Ruffalo came along and showed us what a truly bulky Hulk can look like, I would have excused Venom for not looking like his comic book counterpart since it might look silly or cartoonish. Now, after Avengers came out in 2012 and showed us how good-looking a bulky oversized comic book character can be, superhero movies have no excuse.
Click to expand...

I'll third this. Although I'd be fine with a compromise.

Tom Hardy is already a fairly buff dude as Eddie (Comic Brock was notably a body builder before he became Venom), so I'd be fine if fully symbioted Venom upgraded him to Dwayne Johnson levels of beefy. A very big and imposing man, but still human-sized.

Am I a heretic in saying I like a more slender Venom?

Always liked that appearance better. It makes him more of a doppleganger to Spidey, and I feel there's more menace in something that isn't overtly bulky, but rather more insidious. 'Quiet horror', if you will (even if Venom and Carnage are anything but quiet). 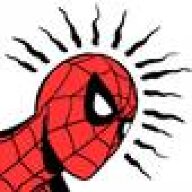 Hawki said:
Am I a heretic in saying I like a more slender Venom?

Always liked that appearance better. It makes him more of a doppleganger to Spidey,
Click to expand...