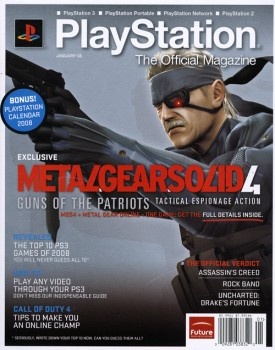 The report of the death of videogame magazines was apparently an exaggeration, according to U.K.-based publisher Future plc [http://www.futureplc.com/], which says they're actually mounting a comeback.

GamesIndustry [http://www.gamesindustry.biz/articles/future-reports-growth-in-gaming-magazines] reports that Future's most recent audit of its print magazines shows "strong growth" in its videogame-related titles. Near the top of the list was the Official Nintendo Magazine, which experienced 27.6 percent growth over the previous year to sales of 61,159 copies per month. The Official PlayStation Magazine reached sales of 51,533 per month, representing growth of 12 percent, while Official Xbox 360 Magazine saw just over two percent growth, to 67,097 issues per months. PSM3 magazine was up 29.5 percent on the year while PSW reached 33.7 percent and N-Gamer achieved 19 percent year-on-year growth.

The numbers might appear surprising in light of the emergence of online media and the overall decline of print magazines, but James Binns, publishing director of Future's games portfolio, said the impressive results come from increased focus on specific reader interests, as well as taking advantage of the print medium's inherent strengths.

"If you look in the men's market, pretty much all of the men's lifestyle titles are down. The men's mags that have done well are the ones that are very, very focused on an individual audience, like Men's Health [http://www.menshealth.com/], which is one of the only ones that has gone up," he said. "So in the same way that specialist media targeting other males has done fine, videogame mags have done fine as well. What people don't want is general interest stuff."

He added that the overall success and growth of the videogame industry is big part of the growth of gaming magazines, and also gave credit to editorial teams who could play to the strengths of print magazines. "We're a dynamic market," he continued. "We're meant to be able to go up, we're meant to be able to grow our numbers right now. What's nice is that we actually are, because there's nothing automatic about it because our audience is dead web savvy as well."

"Websites are so good at first access content. You've really got to play to the strengths of the media," Binns said. "If you want to know about a great game first, probably, the web's the place to go... [But] our readers have always said in surveys that the main reason they buy us is for reviews - reading a review in print is still quite nice and print has such a legacy of respect which is one of the reasons we keep coming back."

The main reason I keep going back to print magazines is because it's so ridiculously hard to lug my PC down to the can.