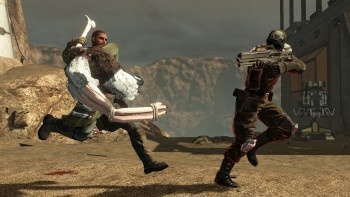 The ball got rolling when early screens of Volition's upcoming Red Faction: Guerrilla were leaked online and an enterprising April Fool's 2009 video [http://www.neogaf.com/forum/showthread.php?t=240533], easily one of the year's best.

Seeing the mighty Ostrich Hammer in action led to calls for the weapon, ridiculous though it may be, to be incorporated into the game and Volition has decided to give the people what they want. "We had no idea the reaction to the video would be so positive and that gamers would really like to kill someone with a very large bird," the studio said on the Red Faction Underground website [http://community.redfaction.com/blogs/?p=325]. "As you can see from the screenshots above (and our quick MS Paint mashup from the video), the Ostrich hammer will be available as a multiplayer unlockable when the game ships in June!"

The studio added that it plans to reveal further "hammer unlocks" and other changes made to the game as a result of feedback received during the multiplayer beta over the next few weeks. Red Faction: Guerrilla is scheduled to ship on June 9 for the PC, PlayStation 3 [http://www.xbox.com].

"As mentioned in the video, without the original thread over on NeoGAF, this hammer would not have been made," the studio said. "I guess there was a plus side to having pre-alpha screenshots leaked out to the internet by mistake..."

Volition's April Fool's video contained something else noticed by a sharp-eyed NeoGAF user as well, unrelated but still noteworthy: A marker board, upon which is written the partially-obscured words "FS3 release day." Birdf*cked! [http://www.neogaf.com/forum/showpost.php?p=15332382&postcount=572]

Misleading title is misleading. But this is still too hilarious XD
D

Damn I want an Ostrich Hammer!

Hammer made out of giant majestic running bird.