Basement Cat said:
The story's been reported on CNN.

New facts: The guy involved had test fired the pistol against a similar book without the bullet going through. The story doesn't say if he did it at a 1 foot distance, though.

The lady was definitely against trying this stunt.

As for her current status:

Perez faces up to 10 years in jail and a fine of up to $20,000 if she is convicted of the manslaughter charge against her. She has been released on bail, and as a condition of her release she cannot possess firearms, needs to notify her attorney of her whereabouts and has to wear a GPS monitor, according to court documents. She will be back in court on July 5.
Click to expand...

Given that she's free on bail I suspect the court is going to be quite lenient with this 7 months pregnant young lady. I hope so, anyway.
Click to expand...

The bullet didn't go through? Yeah, that must've been fudged somehow, IF actually true. A Desert Eagle may not be the same as a sniper rifle with the equivalent caliber ammo, but it's still a powerful gun. Take everything Dirty Harry said and then add 0.06 to the caliber. It's still got penetration worth talking about.

Someone wake up Darwin from his grave again. We need another one of his awards. Seriously, how stupid must you be to actually do something like that?

Basement Cat said:
These two clearly had no clue how powerful such a pistol is!
Click to expand...

And that's why selling guns to people without making them go through some kind of training is fucking retarded. Though against something like this nothing would help, some people are beyond reason. How desperate for internet attention can you be.

The Rogue Wolf said:
I wish people would stop treating firearms like big, loud toys and respect them as the deadly tools they are.
Click to expand...

God damn this. Why do people think guns are toys despite literally everything about them being pretty much over-the-top in how much it emphasises their danger?

It's cute when my 8 year old cousins asks if he can play with my Mossberg, it's migraine inducing when my brother's friend who's an adult does it.
P

I recently read in the paper about a 16 year old guy who choked himself with a rope after being challenged to it online. This is another one of those stories.

I just don't see what can be done about stupidity like that. If you don't get that shooting a gun at somebody or choking yourself with a rope are really dumb ideas, I don't know what to say or do to help you.


Saelune said:
I still dont think putting her in jail will serve any positive purpose.
Click to expand...

I agree. It was stupid but she will likely carry this with her for the rest of her life.

There were 30 onlookers? None of them, plus the two people involved realised that this was an absurdly bad idea?

Hell, even if you could somehow guarantee the book would stop the round, what if you miss? You're likely to sweep the muzzle across part of his body before pointing it at the book.

Now, you might think someone would have to be a bit rubbish to miss at that distance, but then they decided to shoot a book on someone's chest to begin with.

I'm in favor of an IQ test for gun ownership. Calm down gun freaks, everyone gets their 2nd amendment rights... but if you fail the test you can have a flintlock pistol and a musket (what the Constitution's 2nd amendment was actually written to give citizens access to.) You could kill 1 person or yourself by accident with those but it would be difficult to kill any more or spree kill. Passing but with a D or C (barely passing) gets you permission for a bolt action rifle or pump action shotgun, or anything breech loading. Any better score, just the laws we have now (basically a yee-haw free-for-all.)

At least mass shooters will have great plans and be able to execute dozens of people before getting taken down or turning the gun on themselves. That's a plus... right?

Well that is just a dumb thing to do even in concept, let alone in practice.

Lets say that I would have been a lot more vigorous in my testing than doing it once, and then sticking my chest behind that book.

I heard about this last night from a couple of friends. I assumed it had been at a fair distance away, but a fucking foot? Fucking hell.

Didn't watch that Mythbusters episode where even a .22 made decent headway through a book? And a .357 magnum obliterated it?

Ive heard a lot of arguments over the years about how modern medicine is halting human evolution. That there is no more natural selection.

Ladies and gentlemen. We have reached the tipping point where even modern medicine cannot counter such stupidity.

FalloutJack said:
The bullet didn't go through? Yeah, that must've been fudged somehow, IF actually true. A Desert Eagle may not be the same as a sniper rifle with the equivalent caliber ammo, but it's still a powerful gun. Take everything Dirty Harry said and then add 0.06 to the caliber. It's still got penetration worth talking about.
Click to expand...

My best guess is they hit it at an odd angle, increasing the material and not delivering the full force of the bullet. Or even just a fluke that couldn't be repeated and wasn't.

The dude consented to it and there were 30 other people besides the two. I don't think she should be charged with manslaughter since so many were compliant and stupid beyond measure. For all we know, she was reluctant but the crowd and her boyfriend convinced her to participate.

I mean at least start with a really weak bullet BEFORE going to the strongest in your arsenal.

Saelune said:
From what is known so far, I dont think she should go to jail. I'd imagine all the other consequences of the failed stunt will be more than sufficient punishment. Loss of a partner, child likely messed up, etc.
Click to expand...

Reckless Endangerment of a minor (shooting a gun near one); Discharging a firearm in a residential area (most places have laws against that, depending on where they were simply standing, she might've broken a law); Involuntary Manslaughter (acknowledges the accidental, but doesn't mean you get off without punishment), Firing the gun without a license (not sure if she's licensed or not, given it was the guy's idea, I'm guessing he was the gun owner, so she might not even be legal to shoot it.

There are a myriad of laws that she likely broke, regardless of if she intended to kill him or not.
Click to expand...

What license to shoot a gun? I've never heard of one in the US and don't believe it could exist.

The reckless endangerment seems like a stretch to me, kids are able to shoot here as well.

I think we are all in agreement that GUNS ARE NOT TOYS and stupidity is thinning the herd. Idiots want internet fame and for what? To feel some importance to strangers they never see? Fools.

They forgot the words of Heavy Weapons Guy. 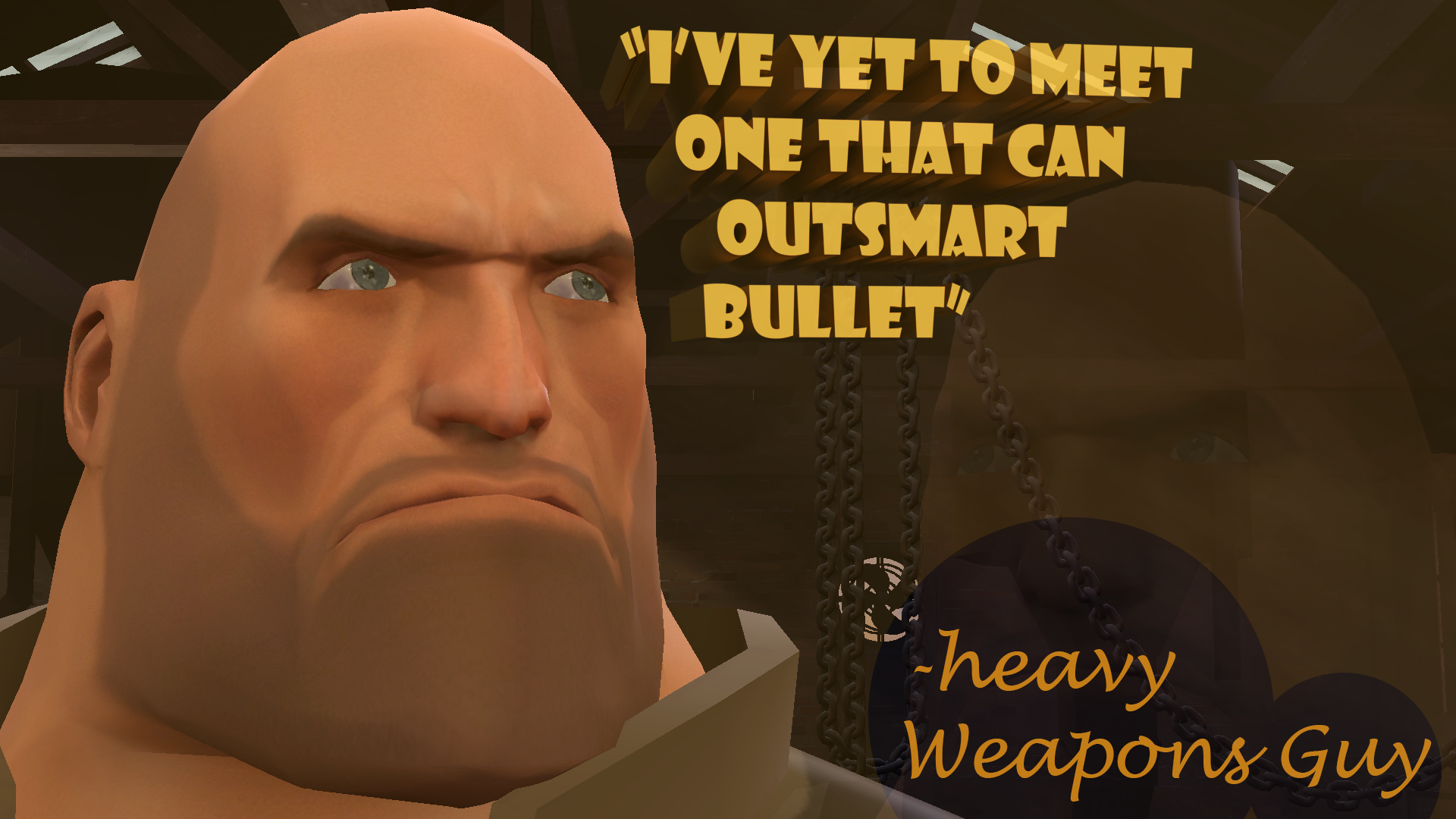 Ok, I think we?re all in consensus that both he AND she were idiots for cooking up this idea and trying to execute it (pun intended,) but what about the +30 onlookers? I see at least 30 counts of criminal negligence. There?s so much fucking dumb going on here, it?s nigh incomprehensible.

I?m sorry, I do sympathize with her and that she had no lethal intent, but the girlfriend should be charged. Drunk driving is a bad decision and a chargeable offence; only difference I see here is that she was not impaired. Her immediate and willful actions lead to a death; as far as I can tell, she was under no duress, so she consented to manslaughter (if that?s even a thing.) For those thinking of her kids, yes, it?s is sorrowful to think of the damage done there, but someone capable of such thoughtless actions needs to have their parental rights and capabilities called into question. To let her off and back to her life as if her actions had no consequences sets a dangerous precedent, especially as social media only seems to be drawing more and more of these ?hold my beer? superstars out of their hidey-holes.

Saelune said:
From what is known so far, I dont think she should go to jail. I'd imagine all the other consequences of the failed stunt will be more than sufficient punishment. Loss of a partner, child likely messed up, etc.
Click to expand...