Someday we'll get a correct answer or explanation but today is not that day, especially regarding the worst videogame adaptation ever.

Clearly House of the Dead was the worst video game movie ever made. There was so much wrong in that movie, I still have nightmares about it.

Regarding Uwe Boll: you know he's behind the "In the Name of the King" Dungeon Seige atrocities, right? And the second one came out just last year? And a Bloodrayne movie came out the year before. And Far Cry in 2008.

Nothing we say here can restart the juggernaut of awful that is Uwe Boll because it never stopped.

Uwe Boll's reign of terror was greatly diminished by the German government closing the tax loophole that enabled him to make a shit-ton of money by cranking out utter drek on a regular basis. He actually has to convince a backer that there's some potential return on investment in order to get financing for his monstrosities.

I WANT A STAR FOX MOVIE TOO. THEY SHOULD MAKE THAT!

I HAVE NO INSIDE VOICE!
Q

Yeah, this topic is pointless to discuss if you haven't seen Boll's movies. Alone in the Dark was particularly horrendous.

Oh, and I couldn't make it through either Silent Hill or Silent Hill 2 without mocking them for being utterly silly games
Click to expand...

You're dead to me 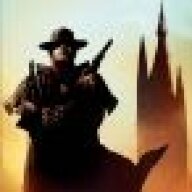 I really liked the Silent Hill movie as well. I don't understand all the hate it gets. So it didn't follow the story from the game. That's a good thing, I prefer a new story then watching a movie try to adapt hours of gameplay into a 2hour movie. It won't work and you'd lose out on a lot of things that made the game great.

Also besides that I think Silent Hill would have done better if it wasn't spouted as a video game movie. Me and my friend are in agreement that it is one of the best Horror films made within the past 20years. All you get now a days are Gore/Slasher and shock horror. But the best type of horror has always been Dread. The fear of the unknown and the Silent Hill movie did this extremely well. Yes it had some Gore and Shock(I'm looking at you Garbage Can), but they weren't so overbearing that it took away from that atmosphere of dread. I wish that more horror movies and video games would focus on dread. I don't think it will happen since horror movies now a days just go after that cheap thrill of Shock Horror and Gore since the audience reaction makes good commercials. Not to mention it's easier.
Show hidden low quality content
You must log in or register to reply here.
Share:
Facebook Twitter Reddit Pinterest Tumblr WhatsApp Email Link
Top Bottom