And I got a new avatar now

btw; This is the first time I saw a cutscene with this Geralt...he looks like a typical gothing-teen-angst figure that (indeed) can not decide if he is a woman or man. If I want a shot of that last bit I just try J-rpg's.
W

excuse me, I mean that the ending voice over was very witty, if a little random. 20 minutes, outside, pufferfish; that will stay fresh for some time. Thanks Yahtzee
T

...well fuck off then so I can enjoy the review
C

As a member of the Glorious PC Gaming Master Race and a player of MUMORPUGs (both single- and multi-player), I loved this week's installment. Cheers.
J

That guy in the end is NOT Geralt as you see him in the game. Geralt is badass, with a really cool voice. Admittedly he isn't the usual buff-and-muscles-stupid Hollywood kind of badass (Feenix, I'm looking at you) he is more of a agile and quick bad ass, and he relies on his skill as much as muscle.

Yahtzee should stay away from RPGs from now on. Seriously, he doesn't know what he's talking about. Complaining about a game having too much dialogue, what the fuck? If you aren't intelligent/patient enough to appreciate the subtler methods of storytelling that's OK, but you can skip the dialogues entirely! I usually love your reviews, but as I said - stay away from the RPG genre.
W

kanetsb said:
LOL, 2 polish games in one shot. Nice You would better avoid that country for some time now.
Click to expand...

Yea, because we won't let you leave alive.
K

Aunt Wendy said:
I feel the need to point out that the bit at the end was not machinima. It was Yahtzee revoicing the intro cinematic for The Witcher. Hope that clears up the confusion.
Click to expand...

It was from Painkiller, not the Witcher.
W

Aunt Wendy said:
I feel the need to point out that the bit at the end was not machinima. It was Yahtzee revoicing the intro cinematic for The Witcher. Hope that clears up the confusion.
Click to expand...

Um, no. I take it you paid as much attention as Yahtzee did? The attempted scrastic jab at PC-gamers' overinflated ego in this review is humorously ironic, because the review itself illustrates the reasons for it very well. The Witcher complex? Ludicrous.

If you enjoyed any CRPG, especialy any of the so-called classics, you'll probably enjoy The Witcher. It's also a lot more streamlined and fast-paced than most of the old timers, while equaly entertaining and with a story and characters easily surpassing anything Bioware and co have been able to show in the past couple of years. Most notably, it has been the only RPG to really give you meaningful choices.

I think the last bit also meant to poke some fun at the system specs for The Witcher. Another sign Yahtzee needs to upgrade methinks, and get rid of that ineffectual black monolyth.

And to boot, it wasn't even funny.

And because a lot of people seem to have gotten it wrong, the last bit did not feature Geralt or anything Witcher related.
D

"He was being sarcastic. The Witcher is a great example of why sometimes the simple controls and interface used in consoles can be better then a PC."

Actually, I thought The Witcher was geared towards console users to start with, considering the combat system being what it is. I thought no one would intentionally make such a boring and static system for a PC game if they didn't have to. But I guess I was wrong ~~

Also, remember that he discussed the over-simplification of game mechanics, and reffering to the "console tards" when dicussing BioShock. : )

"I seem to recall Yathzee saying positive things about Fallout and Torment, so maybe he doesn't hate rpg's in general, just the bad ones."

No... he hates those too : ) Haven't you checked out "www.fullyramblomatic.com" ?

"Did anyone else point out the irony that he mentions how The Witcher tries to make itself seem mature by having the characters curse up a storm and then after the review dub over a cutscene from Painkiller where that angel guy wants to suck off the boring Painkiller guy?"

In what part of that video was he trying to be serious? : )
A

I usually enjoy Yahtzee's "reviews" but found this one disappointing. Kinda pointless reviewing RPG (or in this case "impressions")when the reviewer dislikes the genre in the first place.

For an RPG found the witcher quite good, had some great moments and story. Story, originally, depth is what Yahtzee's been saying there is a lacking in the current market, all of with the witcher has to varying degrees, all without the constant leveling of most RPGs.

Like Jeremy Clarkson's reviews, sometimes rubbishes a good car for a sake for a laugh. Cant please everyone I guess.

However keep up the good work Yahtzee! 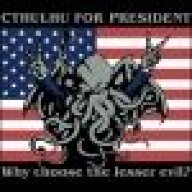 Dagnabit what is so hard about this issue?
The PC comment was irony. Layered irony but irony anyway. YES, Yahtzee was jabbing overly complex PC games. But ONLY overly complex ones. Case closed. If you disagree with this then you're either a PC fanatic who can't countenance criticism of any kind of PC game or you're a consoletard obsessed with bashing PCs. Or you're Yahtzee and meant something else.
Why does this always happen every Yahtzee review? Some dill finds one comment yahtzee makes, completely misunderstands it and starts an argument that has just enough posts every page to be noticable and aggravating.
P

You guys realise that he doesn't get to choose what games he reviews, so telling him to stop reviewing RPG's is a bit like telling the McDonalds serving man/boy/thing to stop servering bugers, he sort of has to.

So what if he doesn't like RPG's, that his opinion and i find it funny...and yes i am an RPG fan, i play many but it doesn't stop me enjoying his reviews. Also if you read between the lines he does give some decent info.

Finally has no-one else ever played a game and realised after 5 minutes if they play this any more they would get more enjoyment from beating themselves to death with any solid object that happens to be at hand? I think some of you take these far to literally and seriously, if the words of a generation...chill

Thank the gods that this scene didnt come from witcher, otherwise id hear 'outside, twenty minute; pufffish' all the time while playing.
L

MinionOfCthulhu said:
Did anyone else point out the irony that he mentions how The Witcher tries to make itself seem mature by having the characters curse up a storm and then after the review dub over a cutscene from Painkiller where that angel guy wants to suck off the boring Painkiller guy?
Click to expand...

Where the boobies fit into this, I'm not sure.
E

Uhm I am curious about the Witcher, but I am not sure I want to buy a game at full price that is boring. And it might be. As much as I love RPGs I must admit that lately the RPGs are quite disappointing me. I am having MORE FUN with old RPGs like Neverwinter Nights 1 and the Baldur Gates series...

Lately I bought Dangeon Siege 2 (since I like the first one) but it was a great disappont ment.
Same for 2worlds... -_-

TES Oblivion also disappointed me a lot. I really LOVED Morrowind and I had great expectations, which were not met at all (although Oblivion is not a bad game, I liked it but it could have been better)

I am not sure to side or not with Yahtzee about the lenght of text and dialog in RPGs... it depends how interesting it is and how much to the point.

Perhaps I'll wait until they discount it... (and if it's as boring as Yahtzee says it won't take that long either)
In any case the witcher made me curious (especially the complexity of it makes me want to check it out)

Anyway Yahtzee you rule, and say hi to your dad for me LOL

PS: my favourite review is still the one about Clive Barker's Jerico (by Clive Barker). It must be because the game is as lame as an Uwe Boll movie... Although I still love all your reviews
R

As much as I love Yahtzee as if he was some holy gift from the gaming Gods, and I'll admit he does spear the game for some valid points, namely Geralt's rather incongruous botomless libido, and the over-reliance on fetchy quests; and there are some points I'm surprised he didn't pickup on, like some wildly inconsistant voice acting, but all the same you should follow up on his advice in his Mass Effect review and ignore this review's conclusion completely if you happen to be a fan of RPGs. The fact he says nothing whatsoever about the story, even the impressive Hot-Fuzz-esque ending of the first chapter, should be a dead give away. The man has speared several different games for moving your character up and down a slider between saint and skeletor, and fails to give the game enough of a chance to see how this game deals with that. Admittably, those omissions do come from a genuine flaw in the game, that it has both a lengthy tutorial and a starter chapter of doom before you get into the meat of the story,but I could name plenty of other RPGs where that is the case to some extent. Hell,even fallout had the dull-as-dishwater "kill the Radscorpions" village before you got rolling. This wasn't a bad episode, because it was very amusing and had Yahtzee being Yahtzee. But you are not necessarily Yahtzee.

It genuinely annoyed me when someone mentioned he'd skip this game for Torment and Fallout 2. Guess what,Yahtzee hates Torment too. The whole reason he's great is that he never tries to deliver a detailed, neutral analysis, he lets fly with his opinion and is hilarious doing it. However, that also means you've got to consider if what he says applies to you. The Witcher ain't perfect by a long shot, but if you like RPGs, it's worth it to pick it up.

Uhm I am curious about the Witcher, but I am not sure I want to buy a game at full price that is boring. And it might be. As much as I love RPGs I must admit that lately the RPGs are quite disappointing me. I am having MORE FUN with old RPGs like Neverwinter Nights 1 and the Baldur Gates series...
Click to expand...

And for guys like this, what Yahtzee desribed was equivalent to Irenicus' Dungeon in BGII. If you're like me youprobably installed Dungeon-Be-Goneto by pass that mind numbing bit of rubbish on your hundredth play-through, but it was worth going through once.

Having actually played Painkiller,I found the "intro-theatre" very funny, but was vaguely disquieted by the fact this made a LOT more sense than the original cinematic. And was better acted. And it has only just occured to me that, coincidentally, both of these games were Polish made, as your total irrelevancy of the day.
C

RabbitDynamite said:
It genuinely annoyed me when someone mentioned he'd skip this game for Torment and Fallout 2. Guess what,Yahtzee hates Torment too.
Click to expand...

So what? When you get near a point, make it.
P