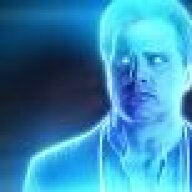 So, Redlin5 created a group for Game On, Hardcore right here on the Escapist forums.
There might be cookies, and milk, and glitches. If you'd like to join up, go here: http://www.escapistmagazine.com/groups/view/Game-On-Hardcore


Objectable said:
I normally hate "Trapped in a Video Game" plots, but this is damn interesting.
Click to expand...

Thanks, dude! Glad to hear that, I'm putting some legwork into making sure this doesn't just end as a big pile of references. We're not yet at my favorite stuff, but will soon be!

I think you're indeed doing this correctly, Scrythe.


Quantum Glass said:
Have the codes in two, three, or four been translated yet? I've started on two, though screwed up somewhere, and as for three and four...I might do them, if I'm asked to, but there isn't any spacing between the letters, which complicates things.
Click to expand...

I think all but episode 4 were translated. The first one was done in the Facebook comments, I believe, the second in the forums, not sure about the third. Also, I might have just mixed that all up, but I think 4 out of 5 have been done here or there, regardless of which ones.


Caramel Frappe said:
Seeing Shepard (male or female version) dead with a face for a skull ... makes me think of Mortal Kombat X ... not sure why.
Click to expand...


FPLOON said:
I remember watching this movie called How To Train Your Wyvern once... Didn't someone loose an arm or something? Other than that, I guess it's too late to say <link=https://www.youtube.com/watch?v=Fqm6d6GPdVE>"There's a glitch in the system..."
Click to expand...

I'd say Toothless definitely qualifies as a Dragon. Wasn't one of the primary Wyvern markers having one's front paws connected to the wings? Game of Thrones dragons aren't really dragons, is what I'm saying.


zombiejoe said:
I love the idea of dealing with glitches in this world, it will make things very interesting I'm sure.
Click to expand...

Thanks, Zombiejoe! There's some cool stuff planned with the glitches - and some drama too, as the world of the game will indeed have some problems with 'em.

Thanks, Guffe! Glad to hear that, the next three should be a blast (unless I have to cut the scenarios due to time constraints, but I hope I can manage to squeeze it all in!).


Dwarfman said:
FemShep!! NOOOOOO!! No worries though! I shall continue to Hold the Line! And wait patiently for the next issue of Marauder Shields *wink wink! nudge nudge! subtle hint! say no more!* Loving your work Koobs! Keep it up my friend
Click to expand...

Oh, man. As far as Marauder goes, I'm stuck at the latest episode, not even kidding. I've reworked it up and down, but the thing that... happens in it is so huge I'm seriously unsure whether I approached it the best way possible. In fact, at this point, I've approached it in three different ways (over several rewrites), but... Yeah, sooon. I do remember about it. I guess "obsess about it" would be fairer.

Who knows? Though he's probably dead, Jenn and Pule have both finished Mass Effect 3.


MarsAtlas said:
RIP Femsehp - died waiting for a canonical ending that made sense.
Click to expand...

It was a long and painful wait, indeed.