General Ma Chao said:
You know what, you're right. Now my interest is really piqued. What are some of the definitive must-read stories? I'm really interested now.
Click to expand...

I would recommend picking up a copy of the three "definitive" collections:

As the review states: "Consider how far civilization had to advance to make this barbarism available to us."
What would Robert E. Howard say if he knew that you could click on a link [http://gutenberg.net.au/ebooks06/0600961h.html] and download his stories?
Click to expand...

Yes. Those three books together have every Conan story Howard ever wrote, in the order he wrote them, fully restored to their original publication drafts (previous reprintings have been rife with editors mucking with his prose, changing names to turn different characters into recurrings, changing main character names to turn non-Conan stories into Conan stories, etc.), together with many unpublished drafts, the essay he wrote for himself laying out the geography and history of Conan's setting, plus essays by others and some beautiful illustrations.

The movies and cartoon series don't do the character justice in comparison.

A word of warning, though: Try to space out reading them. Howard has certain recurring motiffs ("Conan fights an albino ape;" "Conan fights a giant snake") that grow tiresome if read in too quick succession. The stories weren't released all at once, and it's best not to approach the books as though they were novels.
N

Agreed, Mr. Sheppard. I'm only a half-dozen stories into the Coming of Conan the Cimmerian, but I can already see that your advice is sound. I do hope to see some dove-tailing of people and events, but thus far, everything runs in a rather non-sequitur fashion, with no one event building upon any other.

Not that the stories aren't enjoyable; they certainly are, especially considering the fact that action stories typically don't do nothin' for me. What really keeps me disarmed (and reading), however, is R.E. Howard's prose. Sometimes his stuff waxes f---ing poetic. 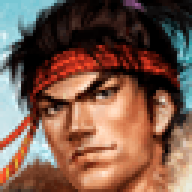 i hate to sound condesending but you realize in the same sentance this calls connan a b list title then complains about the schlock. schlock is kinda the trademark of b movies, just thought i'd point that out. yeah connan is low brow but it is kinda designed that way. and honestly, is god of war any better about it, clice's abound in a game that alot of people seem to think is the best action adventure game in years. overall i liked that connan had an ending as aposed to god of war kind of trailing off. i actually played connan all the way through and despite some of it being difficult beyond all reason i really enjoyed the whole experience. but then again i actually enjoy really tough main characters who can kick a little ass without cowering in the corner first.
R


Thanks for taking the time to check out this article and make a comment.

I also endorse the new Del Rey editions Chris Torrence linked to. I'd suggest checking out The Best of Robert E. Howard as well. This is a two-volume set that covers a broad range of Howard's characters, including Kull (whom Mr KeroChan mentioned), Bran Mak Morn, Solomon Kane, And Sailor Steve Costigan.

There is a controversy, however. You may have noticed that most Conan media today bears the same logo: the Del Rey books, the video game, the Dark Horse comic, and the upcoming movie. This is not a coincidence. All of these media lease the rights to Conan from Conan Properties, a limited liability company held by Paradox Entertainment, a Swedish company now based in California. It's unclear if Paradox's claim to Conan is legitimate.

As Torrence also pointed out, you can read Howard's stuff for free at Gutenberg and, indeed, all over the net. You can also pick up pocket editions of Howard's work put out by Wildside Press, which does not lease from Paradox.

Litigation is underway regarding the status of the two extant Conan films, too.

There are legal arguments with merit on both sides, but, from a common sense view, jesus, the dude blew his brains out in 1936 and never had any kids. Let the world have Conan, I say.

Following from that, I'd also encourage folks to check out Savage Sword of Conan?if you can find it! Me, I've pieced together a collection over many years, and much of that collection is in pieces. Black-and-white comics from the seventies don't retain much mint status.

But Savage Sword merits a look. It was a strange, strange publication. An issue might have a full-length Conan episode, an essay on Hyborian geography, a collection of 'Conan's Women' pin-ups, and a brief Solomon Kane adventure. A bound collection of Savage Swords came out not too long ago.

I want to emphasize that I'm not a Howard purist. His Conan is not the only Conan. I enjoy different takes on the character, as in Savage Sword, so long as they really are a genuine position on what he's all about.

Lastly, thanks to L.B. Jeffries for linking to the PopMatters piece. It was neat. Williams ties together training montages from movies with the powering up mechanic in video games. There may be a single aesthetic underlying both. That's interesting.

I think he gets the reason for the difficulty of the final boss wrong, however. The problem isn't that the battle requires a more complex moveset than the rest of the game; the problem is that the battle is repetitive and boring, because of a symmetry imposed for no apparent reason. Graven follows an absurdly simple pattern, but a slow, slow one. It's excruciating.

Williams also finds it curious that Howard's Conan stories share so much in common with Westerns. It isn't curious at all: Howard lived in Texas and wrote Westerns. One of the most famous Conan stories, 'Beyond the Black River', is explicitly about life on the frontier. A Western frontier at that!

At any rate, I don't want to suggest that I found no merit in the game. This article wasn't a review, but it does give the impression that I had no fun playing Conan. I did have fun with some of it. The gore was excellent and so was much of the humor. Conan also has some of the best art direction of any game, ever. It really does look like a playable Frazetta painting.

Thought provoking article. I think the games industry has been working to evolve the game experience to more than execution of mechanics for quite a while now, just not always successfully. In working with a legendary property like Conan, a developer would need to make decisions about what they are going to focus on. Often, the decision is made to focus on the superficial elements (blood & boobs) without diving into the deeper waters. As you correctly point out, someone as timelessly compelling as Conan has some kind of core resonance that really should be figured out and put into the game, else the experience will feel like...err...(erases cheap sexual analogy)a boozy night out with people you don't really like, leaving you with the aftertaste of wasted time. For a shallow brand, that would be fine. But for a game about a legend like Conan, you expect something compelling that fills the shoes of Joseph Campbell's Hero of a 1000 Faces.
Mr Smith above notes that they deliberately aimed for a 'philosophically simpler' game. IMHO (contrary to conventional game producer wisdom) its a shame to miss out on this kind of depth as it can often be worked into the setting and storyline without interfering with developing features or the game play, it gives meaning and wraps narrative emotions around the game actions. As a player, one can always choose to not give a damn about the story, or drink it up. If its not there, then there is no choice.
Conan, Neo of The Matrix, Die Hard and GoW are all examples of relatively simplistic action hero tales that have transcended their genre (and confused critics) by delivering something eternally epic, and the audiences have been much greater than the core action fans.

While reading this I was reminded of something a friend said yesterday. He's about four months away from graduating with an English degree, and was looking into getting hired as a writer for a video game developer, when he ran into one central problem, developers don't hire writers.

If we want better quality narrative from our games, maybe we should start thinking about getting professional writers to do the plot workups.

Well...you sorta have move away from REH's vision of Conan. REH's philosophy can't just be summed up as men fighting each other, there are all sorts of things that are really fucked up.

Conan (and REH's other stuff) tend to be exceedingly racist, his heroes are always fighting off degenerate tribes of savage black people out to rape or corrupt pure white folk. They tend to be terribly sexist as well, Conan actually tries to rape a woman/giantess in one story, and although that's the worse example, there's plenty of other very disturbing stuff.

Now, it's true the stories were written way back when, pre World War Two when ethnic cleansing wasn't seen with the sort of horror it is nowdays, but if you are doing Conan nowdays, you have to rip much/most of it out and try again.