Not All Fun and Wargames

"If someone asked you to imagine how videogames could be used to train our military personnel, you might picture a horde of trigger-happy troops fresh from hundreds of hours playing the latest Halo equivalent, wreaking havoc and being a bit surprised that they only have the one life.

"In spite of first-person shooters such as America's Army having been used by the military for recruitment, the focus of military training simulations isn't thinking with your proverbial rifle. The Army is using games as tactical decision aids, training soldiers to make better decisions and preparing them mentally for what they will experience." 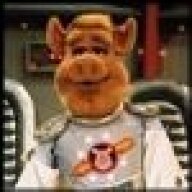 One day we will see a video on YouTube of soldiers in Iraq "Tea-Bagging" corpses. How far the human race has come, how far...

Given that we've already seen the Abu Ghraib photographs and footage of soldiers taunting kids and (if I recall correctly) throwing puppies, mere tea-bagging would be a welcome change for the better. Then again, this crap has happened in earlier wars (skull trophies, anyone?) so I don't think video games can take the blame for this.

Given that we've already seen the Abu Ghraib photographs and footage of soldiers taunting kids and (if I recall correctly) throwing puppies, mere tea-bagging would be a welcome change for the better. Then again, this crap has happened in earlier wars (skull trophies, anyone?) so I don't think video games can take the blame for this.

Exactly. I don't remember who actually said this but the phrase "War becomes us" comes to mind.

But that is not what this article is about, is it? Various military have been eying the prospect of having "virtual" training for quite some time now, probably since someone first adopted the idea into a piece of science fiction.

IMHO, only a game that can be heavily modded would ever be appropriate for training purposes. So far we have plenty of promotional entertainment, but those striving for brutal realism are left wanting.

As a gamer, I could honestly care less about realism though, I only care if the journey I take is fun or tedious. I don't need realism to have fun, only believability.

For a military though, they need that realism, so that they don't go into life threatening situations with unrealistic expectations that can get them killed. To a gamer, silly and stupid AI is just a quirk to deal with to accomplish a goal, to a front line man its not being properly mentally prepared for his opponents.

The whole point that I think this peice is pointed towards is the growth of Simulators becoming living environments. There are many companies at this moment in time basing their games off the Afghan environment. Not for a ground pounder... but for commanders. The interaction between the people on the ground and these developers are what will make this area evolve.

I for one look forward to reading about 'A real Life game of RISK?' and 'Road to Kabul: Provence by Provence'.