With the release of Sin City: A Dame to Kill For we are giving you eight of Frank Miller's best comic book covers. He did so much more than create Sin City, he helped a generation visualize their heroes. He has given us so much to be thankful for, from his work on the Wolverine series to his mind blowing version of everyone's favorite superhero Batman. So buckle up, it may be a bumpy ride.

Why does Wonder Woman's skeleton have hair??!!

Seriously though, while I detest Frank Miller, I can't deny that those are some great covers. 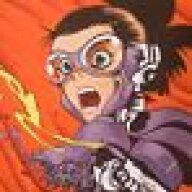 Conan was by Robert E. Howard. And is it a strangled damsel in a fridge over there?
S

Ah, ye olde pro Frank Miller vs contra Frank Miller debate.
It's like all of his work: I like some of it, but I always have something to critique. For example: Batman Dark Knight Returns revitalized the entire Batman franchise. Undeniable.
However, there are mayor discussion to be had about Batman using guns, killing, etc.
So, while I find the Moon Knight cover pretty rad I do not like the Wolverine one. The "come-hither" gesture, combined with the grinning ..... it's just not how I perceive Wolverine. That's a pose I would expect to see on the Joker, for example, a psychopath who enjoys killing. Wolverine is more the animalistic killer, all fury and yelling, or seaking and cold blooded. Nothing about that says "grinning" to me.
Show hidden low quality content
You must log in or register to reply here.
Share:
Facebook Twitter Reddit Pinterest Tumblr WhatsApp Email Link
Top Bottom