A term for this facial expression?

Ok so I'm writing a book, and I'm trying to find a term for a particular expression that humans use a lot. But for the life of me, I can't think of any term that's been used to describe it.

So, like how we all know when someone says the person frowned, or scowled, or pursed their lips, as far as what it looks like, do any of you recall a term being used to describe that facial expression where someone sees something, is surprised by it, but also approves?

Where they stick out their bottom lip like they are pouting, eyes go a little wide to indicate "wow, I didn't see that coming." but the overall tone is "i approve of that." or "she did an unexpected, but cool and awesome thing." ?

Because I'd REALLY like to be able to just use a word or two to describe that, instead of...well, the multiple sentences I used above to describe it.

Basically the "Not Bad" face meme, but using a term that isn't just saying "He adopted a Not Bad face."

Not sure if there?s a specific word or phrase for that specific expression, but ?pleasantly surprised? encapsulates the spirit of it.

I was going to say that that'd work better if you had put a picture in, but to do that you'd probably google whatever that expression is called.

Can't think of anything myself, but bemused with something to indicate being pleased tacked on.

If forced to make up a new term to describe it I'd go with "bwow face" (one syllable.)

If all else fails, there's always the direct route. For instance, "he snarled, his face contorted with rage" says very little about the mechanics of the facial expression, but it paints a picture that most will grasp without a second thought. So too here we might simply say something to the effect of "eyed the unfolding events with curiosity" or "she looked on attentively, evidently surprised and maybe a little impressed"

You're talking about this expression, right? 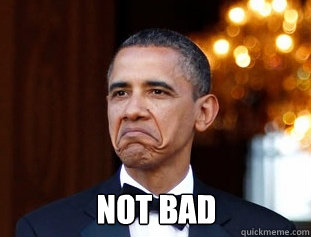 What I'd probably do is not mention the mouth, maybe just say the eyebrows peaked in interest, maybe they gave a slight nod of approval or something. Chances are the audience will slot in the mental image of that mouth without even realising.
H

Yes I'm talking about that image, hence why I mentioned the Not Bad meme. And yeah I wasn't thinking I'd be lucky enough to find a word that would specifically work for it. Was just hoping it was out there and I just didn't know it. xD

See, if I were the one writing, I'd just call this something like "a frown but with approval shining in his eyes". You don't NEED to just use a single term like "scowl" to describe every sort of expression.

That implies confusion or puzzlement.

You can also use words to describe the oddity of the expression.