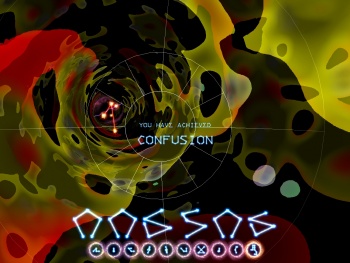 What is Brainpipe? Is it an otherworldly mind control device, masquerading as a seemingly quaint computer game, or is it an addictive endurance run game from Digital Eel [http://www.digital-eel.com/]? Perhaps both.

If you've ever seen one of the excellent CGI realizations of the blood stream in House M.D. [http://www.fox.com/house/] and thought, "that'd be cool to race in," you're apparently not alone. Brainpipe's story is a concoction of nightmare fuel [http://tvtropes.org/pmwiki/pmwiki.php/Main/NightmareFuel] in which you are projecting yourself through the passages of your own mind, collecting the glowing sparks of transcendence, while avoiding the bad ideas that will send you spiraling into a coma.

Brainpipe(A Plunge To UnHumanity) is a game like Space Giraffe or Flower in which the game itself is reasonably easy, but playing it "just" as a game misses the point. This is pure mindcandy, as, from the entry into the nasal ganglia you will feel drawn into the game rather than just the the gameplay.

Whether it's the creepy eyeballs, the reactive iris HUD, or the brief samples that appear from nowhere, it's something that takes you away from the simple racing game that it appears to be into a state of engrossing bewilderment. Or maybe I've just been hitting the cold medicine a little too hard today. It's tough to say.

A two-level demo is downloadable here [http://www.shrapnelgames.com/Digital_Eel/BP/BP_page.html] to give you a little taster before you splash out $15 on your Mac or PC version.

and i thought mY game idea was trippy