Tare stood over the body for hours listening to the whole of nature watching her as she cleaned the blood off of her knife. Her knife. It was her knife now. Not even Lysei could take that moment from her.

She was sure even the fairies had seen it, though she didn't see them. She would find them. They told her she could do it. And she did it.

Hunting a prophet is not an easy task. Even with the help of the gods. Squads of phantoms were picked and sent on the word of the Awnite prophet and Ashlif, and all they had to work on was a drawing. A drawing and a name they might not even be going under.

Armed with stiff grey panoply coats and krakar gas masks to mask their rank, avto rifles with three spare drum magazines of blessed ammo, and five kaupaloki per man. They probably had years to find them. Probably. Prophets took time to develop, or atleast that was their understanding of the yellow cycle.

And the Vatnahlifir were happy to do it. Every time. Until the end to every cycle came and they were finally ready to bring the time of gods and demons to its close.

Rumour spread of maps in the possession of esoteric groups that lead through the anomalous conditions on the edges of the known world. Hopeful rumours of a land beyond, untouched by the wars of the past and the cataclysms of the gods. 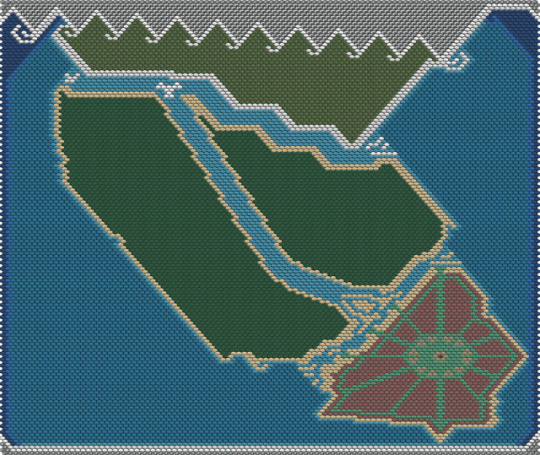 In the cold spring air a group of covenant officers arrived at the location of one of the aberrant bodies that had been found over the past couple of months. Though the priority was relatively low with the commonality of aberrant things washing ashore, the lack of rot, and them having moved it to one of their few cold storage facilities.

This one was odd though by the standards of aberrations and they had soon realized why by the time the second, third, and so on were reported and eventually examined by the Vatnahlifir. They were uniform. They didn't fade. And their flesh was their own.

This spooked the officers charged with examining and cataloguing the bodies. The smell and taste was familiar though to the older agents sent to examine them. They were supposed to have left centuries ago. Where did they come from?


The Vatnahlifir
Create a Concept - Covenant Officers (+1 to Wealth Production) - The Vatnahlifir works the majority of its influence beyond Khaganian borders through Project Covenant, a program developed to combat the yellow threat across the confederacy. Though not directly controlled by the Vatnahlifir, Covenant offices and officers owe their tactics, organization, and plans to Ajivha and the Vatnahlifir.

Create a Concept - Guided by the Stars (+1 to Wealth Production) - The learned Vatnahlifir often turn to the heavens and prayer for understanding and advice. They have extensive records of the sky and the movements of the celestial, most of which is sold openly to academics.

Create a Concept - The Guiding Hand (+1 to Wealth Production) - The cult at the core of the Vatnahlifir likes to see itself as a guiding hand in the vein of Sinan's work to unify the order behind Ajivha and the Khaganate. They put a lot of effort into this work through the cult of Sinan and endeavour to consolidate power into their membership.

Maps were drawn and a pattern began to emerge. The first body had washed up in Ajivha along the southern shores, then a few along the coast of the Republic of Awn, Aurora, and then Basalt Territory. They hadn't seen any yet in Corpus land or atleast none had been reported to the project.

The things that hadn't been named beyond I-7 were following an odd path through the waves. Where they were coming from was still unknown, as was what they were doing or wanted down here. That made them as dangerous as the threat of a return, assuming that's not what was happening.

In the Northeast funding was acquired for a journey to the West through recently uncovered corridors in the anomaly. A Vatnahlifir would be placed amongst the Covenant officers to accompany the crew of the expedition and drop a communication pole every time a course correction was made so that the journey could be replicated later... and assure a path for the secondary expedition that would be made if objective delta was uncovered.

The journey East was a long and treacherous journey through storms unknown to the ancients. But the path before them was known, now ancient maps through the eternal stormwalls layed a path before the ships.

When they finally passed through it was a shock to the sailors. Clear turquoise skies and clear turquoise waters teeming with fish. In the distance land was spotted through scopes as another pole was dropped into the water.

Vast archipelagoes of land. Unknown to the people.

Silver plated patrol boats with little in the way of marking set out from Karsha seeking the source of the I-7. They were to sweep North, meeting with emplaced resources, gathering any evidence they came across, and setting mines at key points before making their way again South around the mines, even though as they were designed they wouldn't set them off on their own.

[hr]
Kismet
Exploration x 3 - Kismet explores the new continent to see what of interest can be found on its west coast.

Decided to rename this project Ascendancy: 1900 in preparation for the eventual retooling.