I really need to do reviews more regularly.

The Saboteur is an open world game set in World War 2, allowing you to use stealth and climbing to accomplish objectives. You play as Sean Devlin, an Irish race car driver who is thrust into allegiance with the French Resistance after the Germans invade and his best friend is killed.

One of a kind. The Saboteur is an open world game released into a sea of familiar titles, what it does differently however is manage to be one of the more unique releases in the genre. Ok so you run around stealing cars and tanks but what makes it different to games like GTA 4 or Saints Row 2 is the inclusion of a completely functional climbing ability, more on that later. Other saving graces come in the form of the very setting itself, a noir Paris under an oppressive German occupation. The game incorporates a black and white style into the world with areas under the oppression of the German troops bathed in darkness, rain and depressed citizens, whereas areas where you inspire the local populace, colour will reign supreme and the French Resistance will be willing to help you should you find yourself in any trouble.

Ideas that mix well. The Saboteur's stealth game play works well, not amazing, but in an open world title that's an impressive achievement. You can be infiltrating a German complex, you tail a guard to a secluded location, knife him in the back, take his disguise and then proceed to enter the base, quietly planting explosives and taking out overly suspicious Krauts. Standing back and watching the fireworks is the icing on the cake. The fact that the stealth game play works is something to be applauded, accompanied with the climbing aspect, The Saboteur gives you a new way to play.

A story that doesn't take itself seriously. Ah, World War 2. So many times we have seen the same old gritty take on this horrible conflict. The Saboteur would have fallen flat straight out of the door if it wasn't for the fact that it doesn't take itself to seriously. That isn't to say it's not completely over the top. But the eccentric stereotypes from the vulgar Irish protagonist to the charming ladies man of a French Resistance leader really do play well and the story, while not a war epic, simply follows one mans quest for revenge. This is a tale which won't win any awards, but you will be fighting alongside the protagonist Sean to the end. The German soldiers too are a sometimes comical affair, appearing like something out of a sketch show at times rather than the harsh reality of German soldiers usually portrayed. 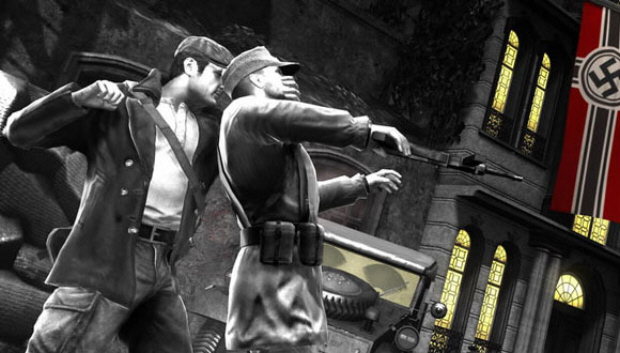 Rough edges. The Saboteur doesn't feel very polished. This is probably because the developer, Pandemic, was shit down by EA shortly before release. Nevertheless the game looks a bit rough, especially once the veil of darkness is lifted and the liberated areas are shown in their full colour. Likewise the views in the distance don't look very detailed and it can be odd to stand on top of a tall building and look over to another part of the city, drenched in darkness. The side missions too are fairly lacking, aside from story mission, racing and free play events are all there is to keep you occupied. The free play events themselves are little white dots on the map, hundreds of them to be precise. It will take a lot of play time to destroy them all, and doing so doesn't really reap a big reward apart from cash to buy upgrades with. They also get a bit boring to complete, destroying towers, search lights, tanks and many more does get a bit monotonous and feels too much like things you do in the main missions.

He's no Ezio. Our bulky Irishman Sean definitely isn't as nimble as Ezio, or Altair for that matter, from the Assassins Creed line of games. He is slower to climb buildings and you have to tap A each time you want to climb up instead of holding it down as you do in Assassins Creed. Likewise, dropping down ledges is also reversed as you will have to hold B if you want to drop more than a couple of metres.

The Saboteur is certainly a good game, although lacking a layer of polish or two, you will still find 25 plus hours of fun to be had here. The story may not be the epic you were looking for and side missions leave a bit to be desired, but nonetheless there is plenty of fun to have in this unique open world game.

It's not your usual World War 2 game, it is however worth your cash if you enjoy an open world game with something different to offer.

Infiltrating an old castle, heavily occupied by Nazi's, disguising myself, planting the bombs without being spotted, getting out and detonating the explosives in the pouring rain whilst watching my 'fellow soldiers' scramble around looking for the culprit. The atmosphere was just amazing.

You do need to do reviews more often as they're all really good (I've only read three, actually)


And now, for a question: How fun is the knife? Does it make a cool noise when you shank people, etc?

dimensione510 said:
You do need to do reviews more often as they're all really good (I've only read three, actually)


And now, for a question: How fun is the knife? Does it make a cool noise when you shank people, etc?
Click to expand...

The knife is pretty cool for what it does, killing the enemy quietly. If you do it that way it also takes some time for them to drop to the floor, allowing you to slip away unnoticed. Unfortunately no cool slicing sounds or blood splatters, it looks more like a touch of death.
Show hidden low quality content
You must log in or register to reply here.
Share:
Facebook Twitter Reddit Pinterest Tumblr WhatsApp Email Link
Top Bottom